FILMED AND EDITED BY
PAUL TIEFENBACHER

We fly into Bordeaux on a grey April morning to skate and shoot the new Antix collection. The airport is not charming. I don’t know much about the place other than the fact that it’s home to Leo Valls, the owner of the most rhythmic skateboarding style on the planet. But that’s fine. Knowing too much can be a bad thing. The finer points of the trip are all a bit of a jumble in my mind, but that’s why I take photographs and why Paul is filming. Hopefully, the visual and written fragments below give you a sense of how we spent our time in this lovely city. 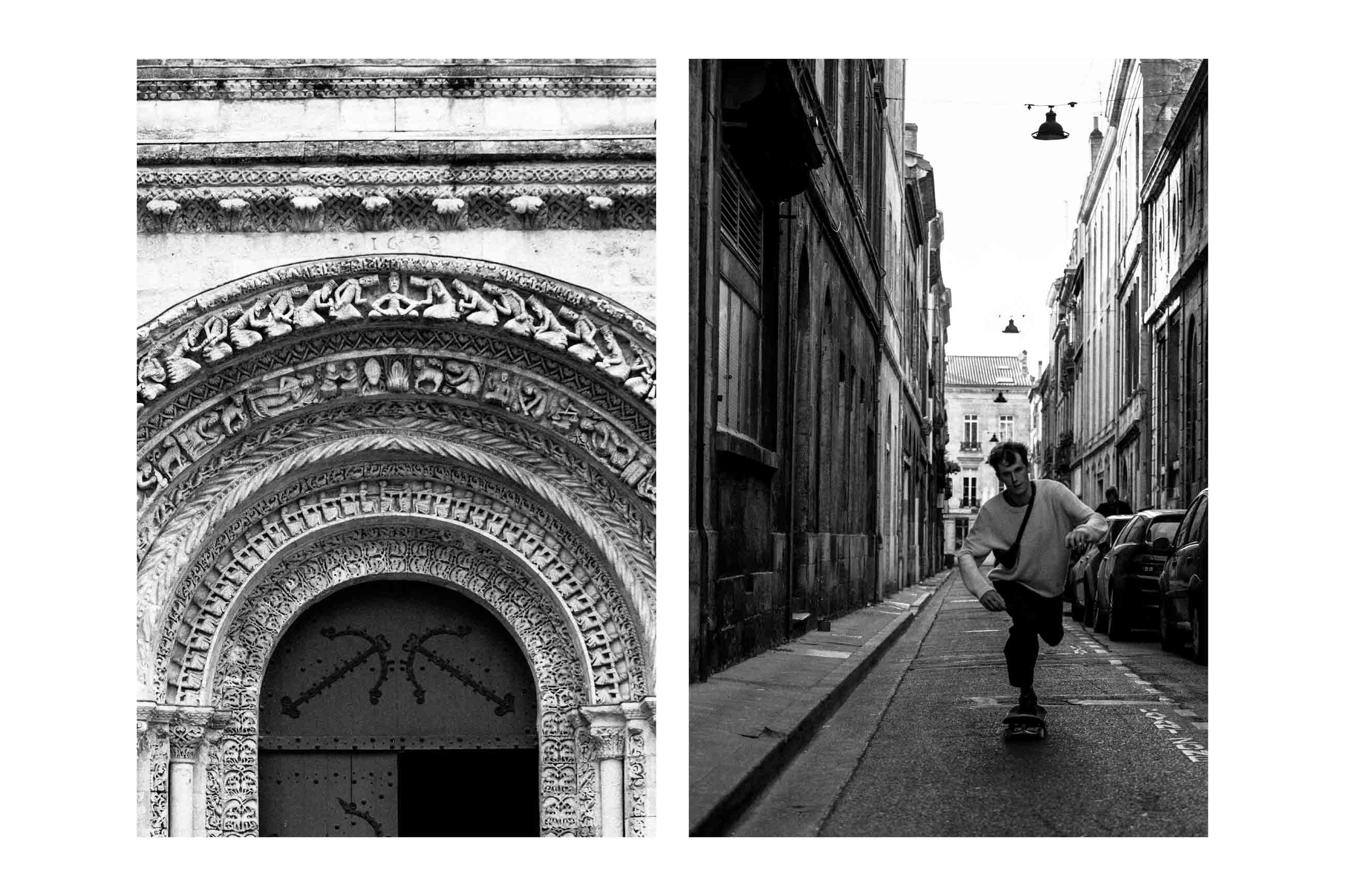 It’s so French here, some streets are grim but most are beautiful, even if it’s too rough to skate they’re still nice to walk down.

We find and skate a delightful forest/carpark in the middle of the city. It was strangely quiet. I was lying on my back to shoot, and between tries I would gaze up at the sky through the leaves. Matze rode off a tree, and Dominic smashed into a pole. Franco skated too, and all were wearing white. 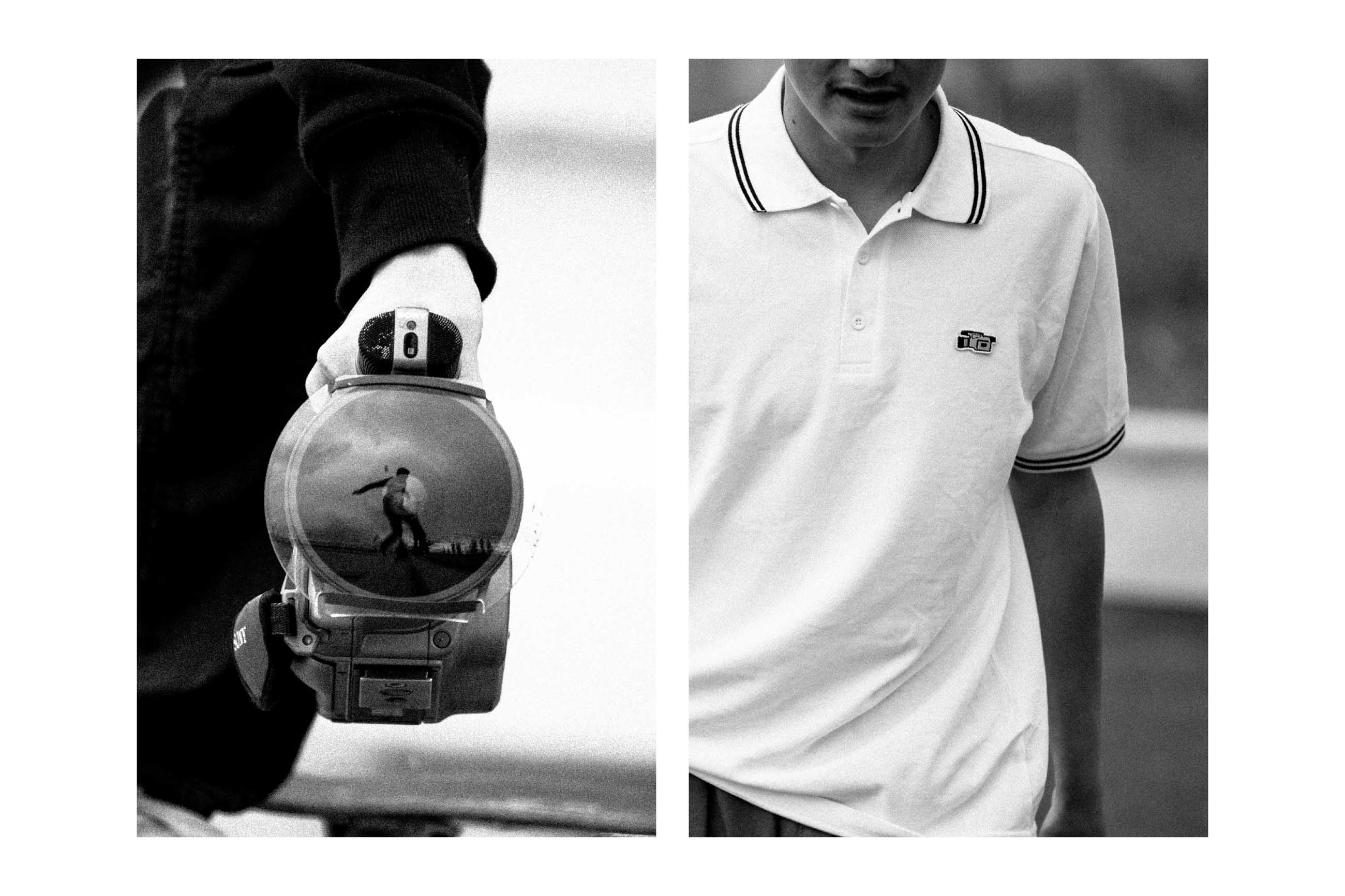 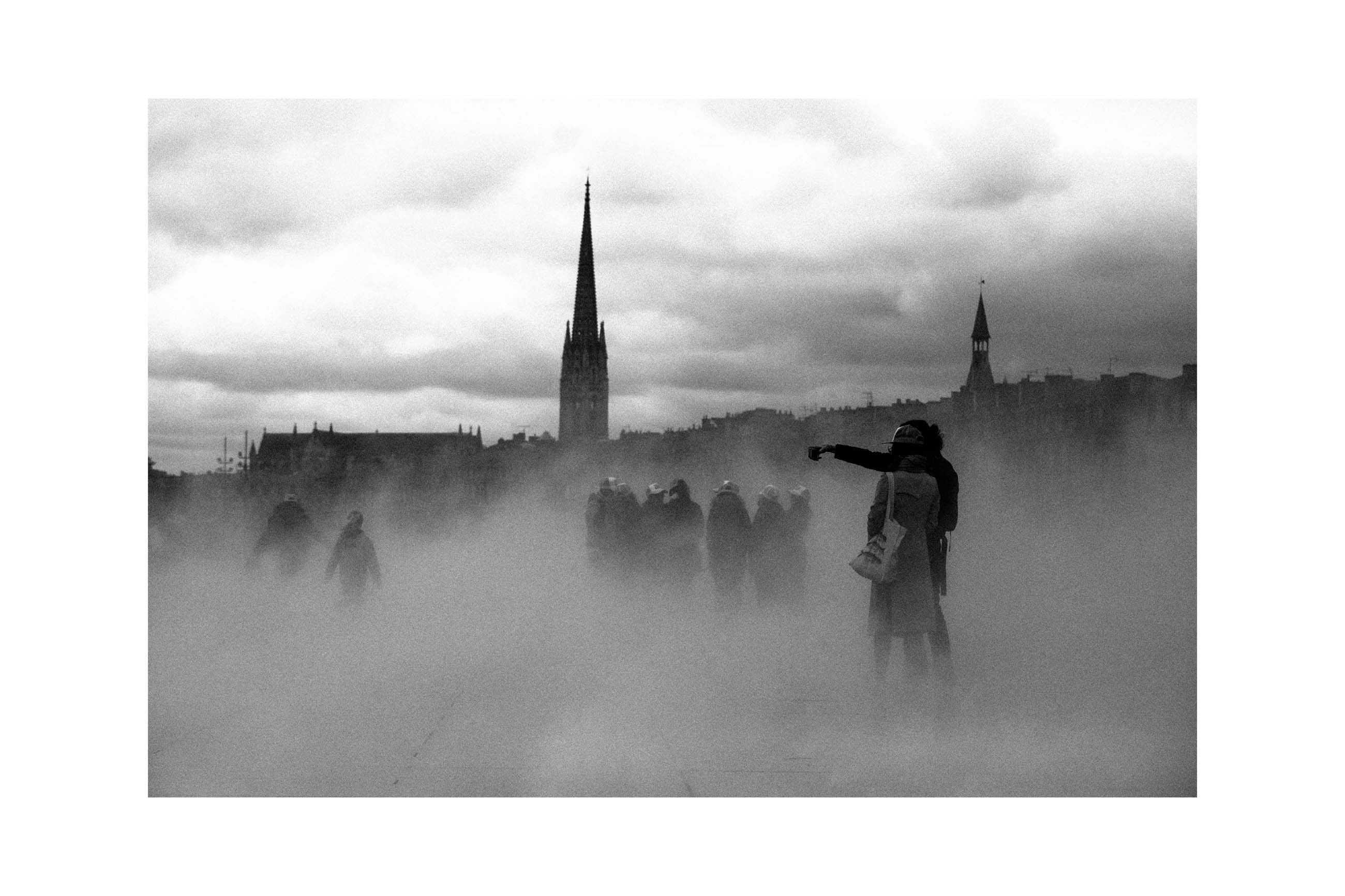 We see selfies in the mist at the Mirroir d’eau.

I become fixated on photographing pigeons and statues. The statues are patient subjects, not so much the pigeons. The big bronze chicken is also majestic. 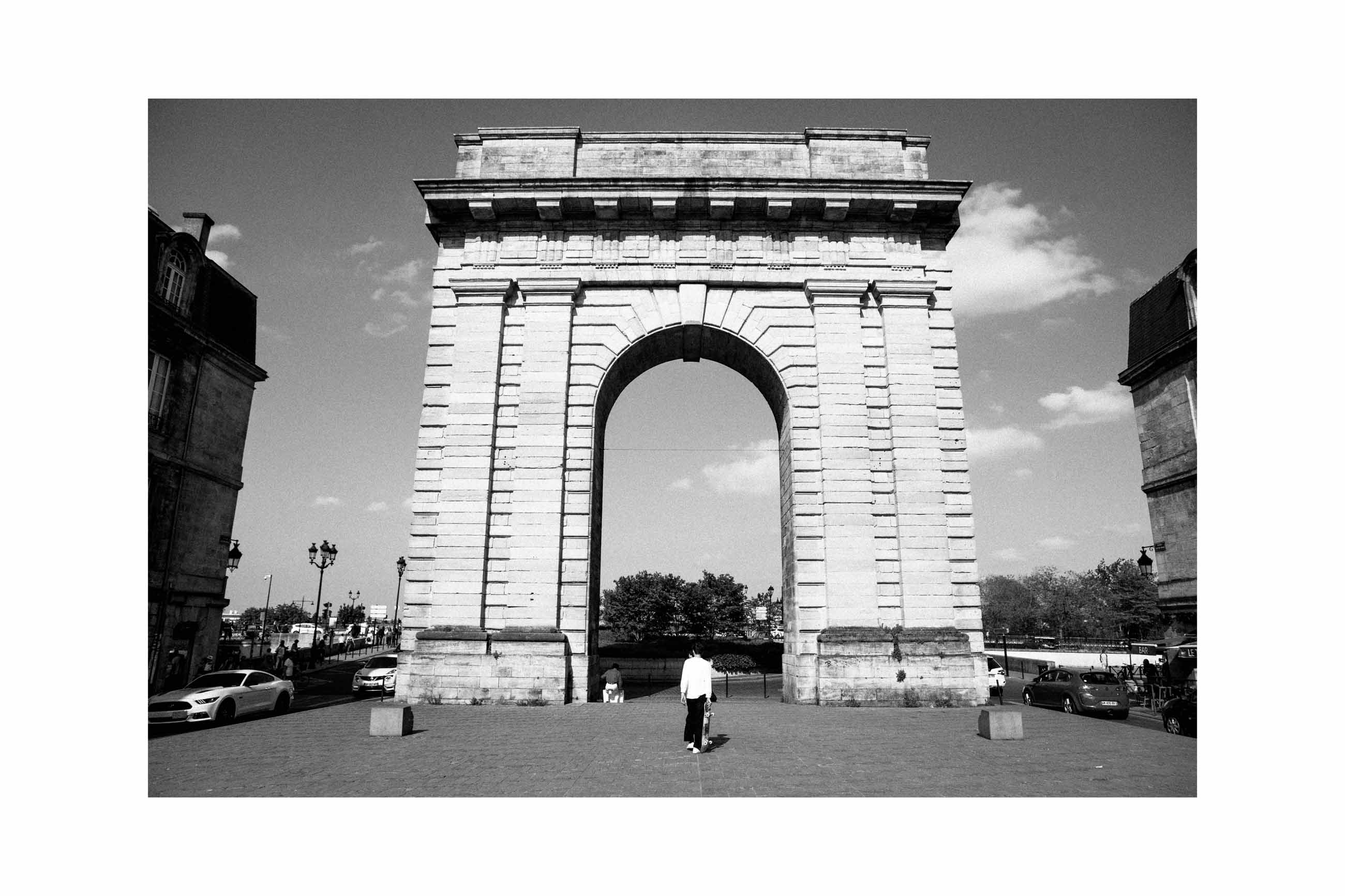 The largest stone doorway in the world is discovered, and just around the corner, some guys start having a fight. We walk slightly further away.

It was raining a bit and no one wanted to skate. Matze went to work on these blocks in the middle of nowhere, and then we left.

Cobbles and flagstones give a musical edge to our skating.

An art museum provides some needed distraction from ourselves. Inside we see some giant paintings of Bordeaux, as well as a statue of an old and pretty dead looking woman. Or maybe it was a man. Dead looking for sure. 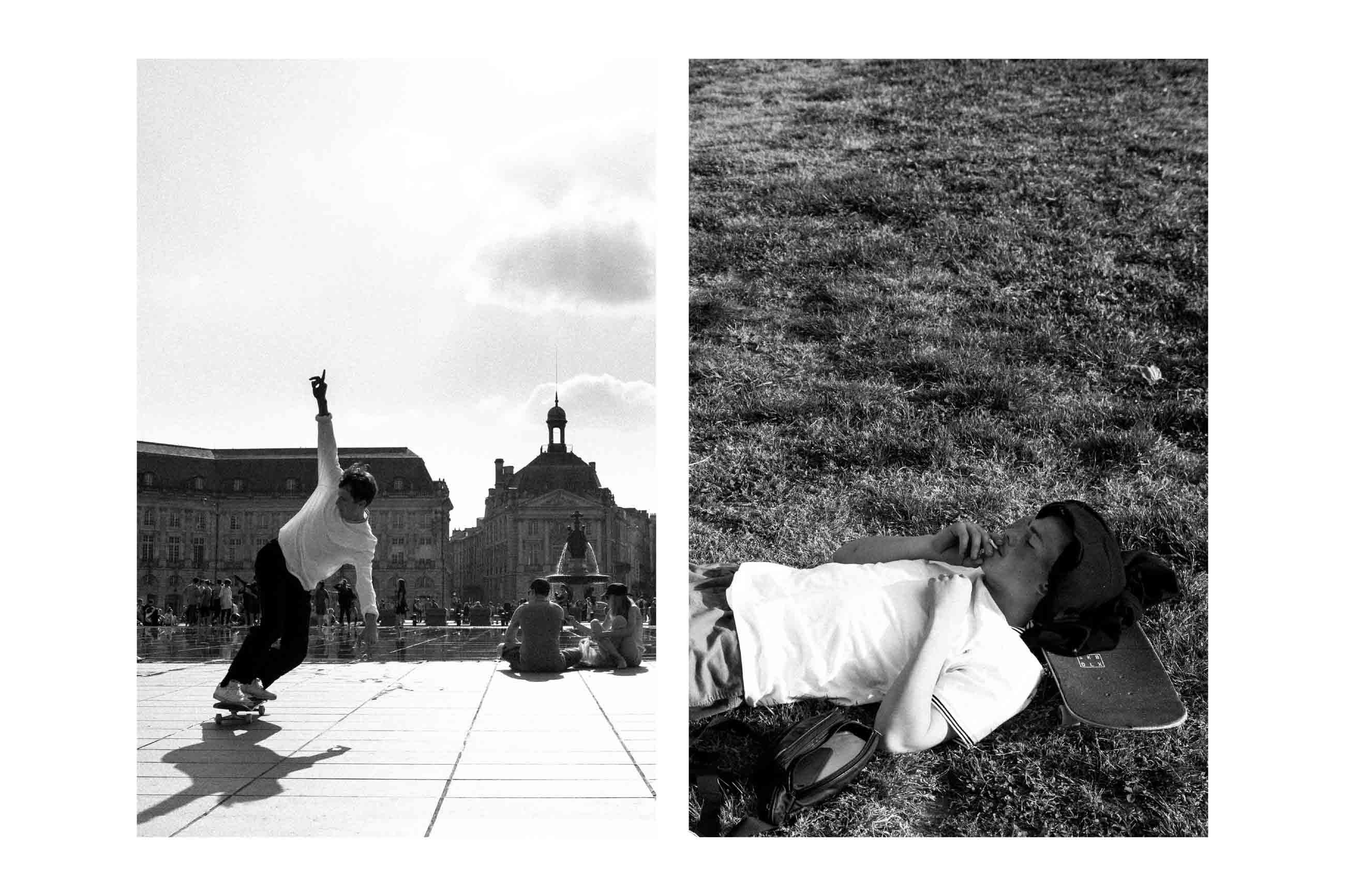 On the promenade, we watch a man doing ballet on rollerblades whilst we lie in the sun like suburban pirates.

Seb Daurel blasts the vert ramp at Darwin, his precision and flow is wonderful to watch. This place is fun. I meet another skateboarder there called Theo, a rare occurrence that causes me much happiness. The rest of the crew made friends with the couch.