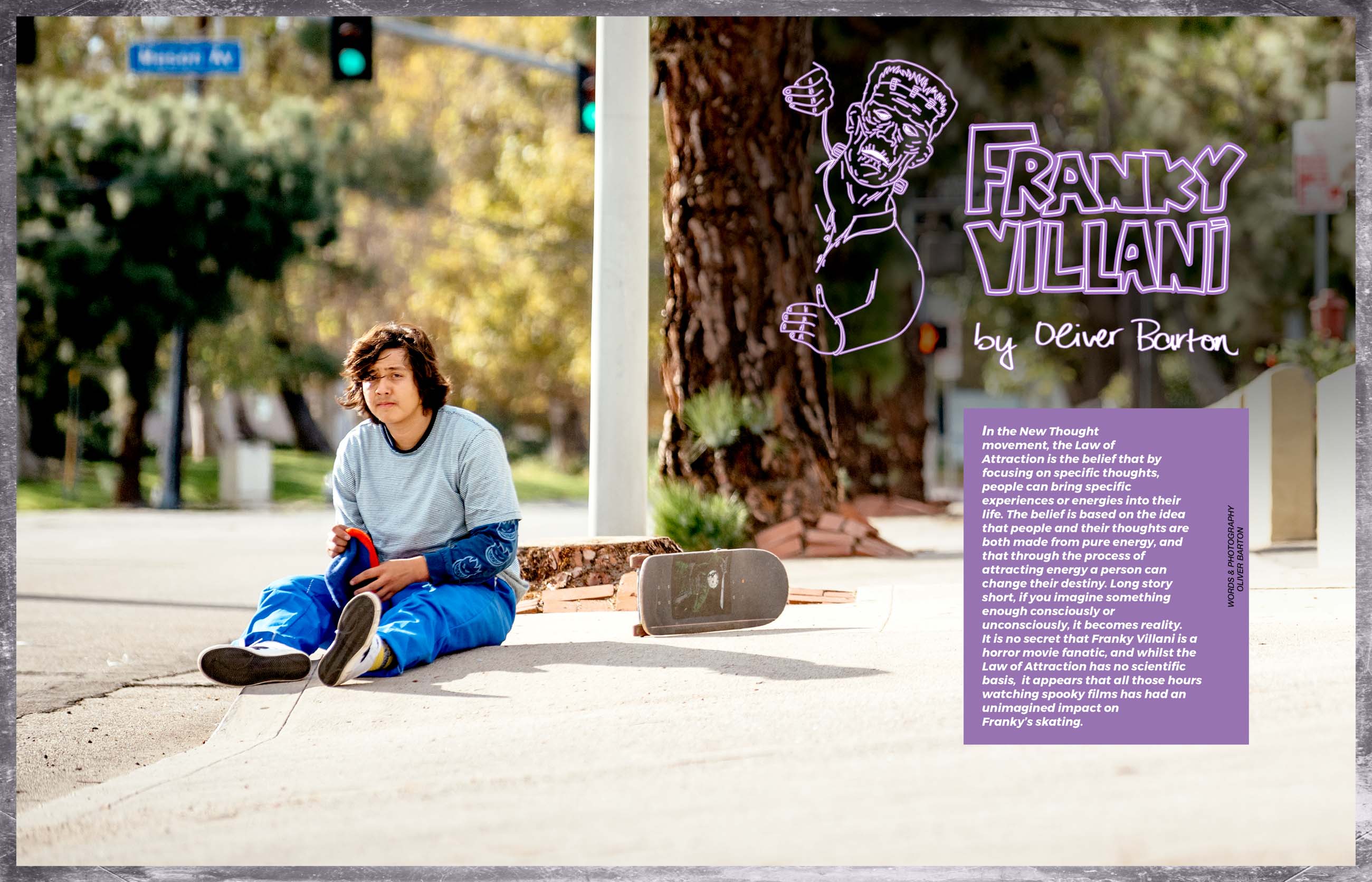 In the New Thought movement, the Law of Attraction is the belief that by focusing on specific thoughts, people can bring specific experiences or energies into their life. The belief is based on the idea that people and their thoughts are both made from pure energy, and that through the process of attracting energy a person can change their destiny. Long story short, if you imagine something enough consciously or unconsciously, it becomes reality. It is no secret that Franky Villani is a horror movie fanatic, and whilst the Law of Attraction has no scientific basis, it appears that all those hours watching spooky films has had an unimagined impact on Franky’s skating. 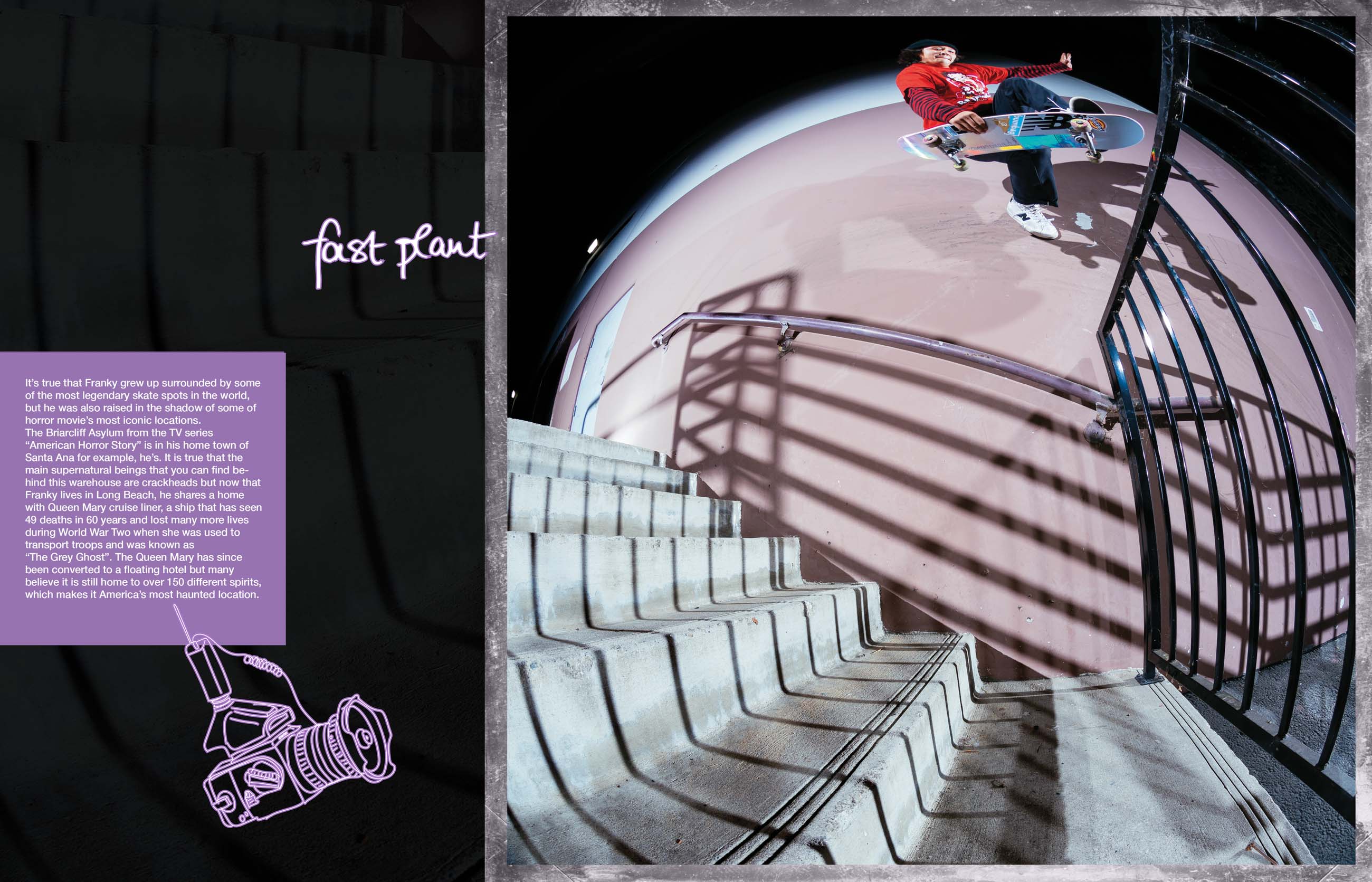 It’s true that Franky grew up surrounded by some of the most legendary skate spots in the world, but he was also raised in the shadow of some of horror movie’s most iconic locations. The Briarcliff Asylum from the TV series “American Horror Story” is in his home town of Santa Ana for example, he’s. It is true that the main supernatural beings that you can find behind this warehouse are crackheads but now that Franky lives in Long Beach, he shares a home with Queen Mary cruise liner, a ship that has seen 49 deaths in 60 years and lost many more lives during World War Two when she was used to transport troops and was known as “The Grey Ghost”. The Queen Mary has since been converted to a floating hotel but many believe it is still home to over 150 different spirits, which makes it America’s most haunted location.

Sacramento is home to one of the most unusual serial killers of all time, an elderly lady call Dorothea Puente. Dubbed the “Death House Landlady”, Dorothea was an old lady who owned a boarding house for senior citizens. Dorothea would poison her victims and then either dump the bodies or bury them in the back garden of the lodging house whilst continuing to cash their social security checks. Puente died in 2011, but her presence is very much felt at her old home at 1426 F Street in Downtown Sac where people have toughed certain parts of the garden, gone cold and then rested at home for several days complaining that they felt completely drained.

When it came to choosing a city for Franky’s last filming trip for his “Always On My Mind Part”, Franky had one place in mind: Montreal. Home to Peace Park, the Dime Glory challenge and cult classic spot “The O”, Montreal is also home to the world’s best made DIY where this handplant was shot. The DIY also features a multi-level BBQ area, organic vegetable garden and full street section. Montreal is also home to the Miskatonic Institute of Horror Studies, a film school which only studies one genre, horror. Apparently “filming trip” can mean different things to different people. 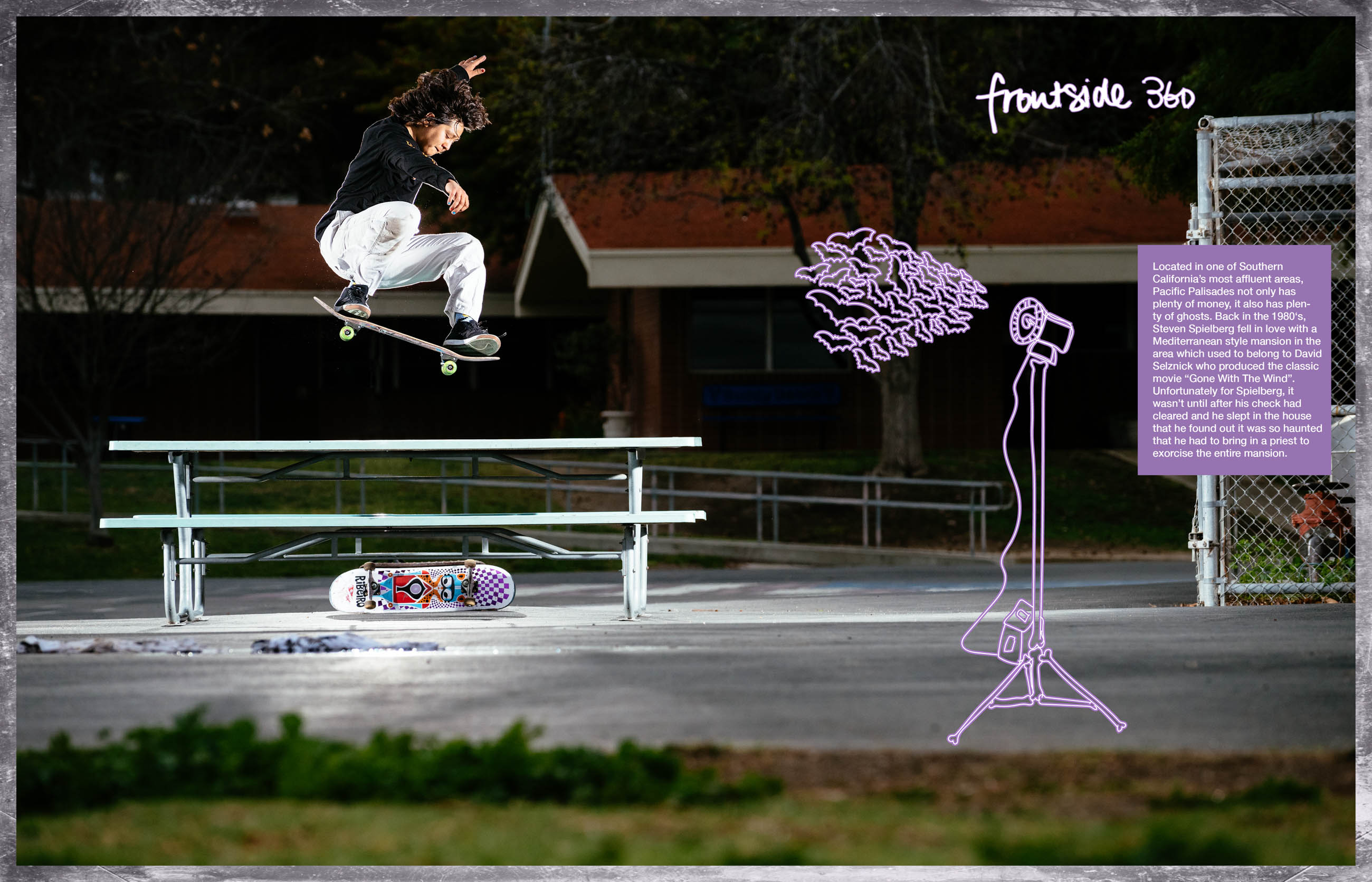 Located in one of Southern California’s most affluent areas, Pacific Palisades not only has plenty of money, it also has plenty of ghosts. Back in the 1980’s, Steven Spielberg fell in love with a Mediterranean style mansion in the area which used to belong to David Selznick who produced the classic movie “Gone With The Wind”. Unfortunately for Spielberg, it wasn’t until after his check had cleared and he slept in the house that he found out it was so haunted that he had to bring in a priest to exorcise the entire mansion. 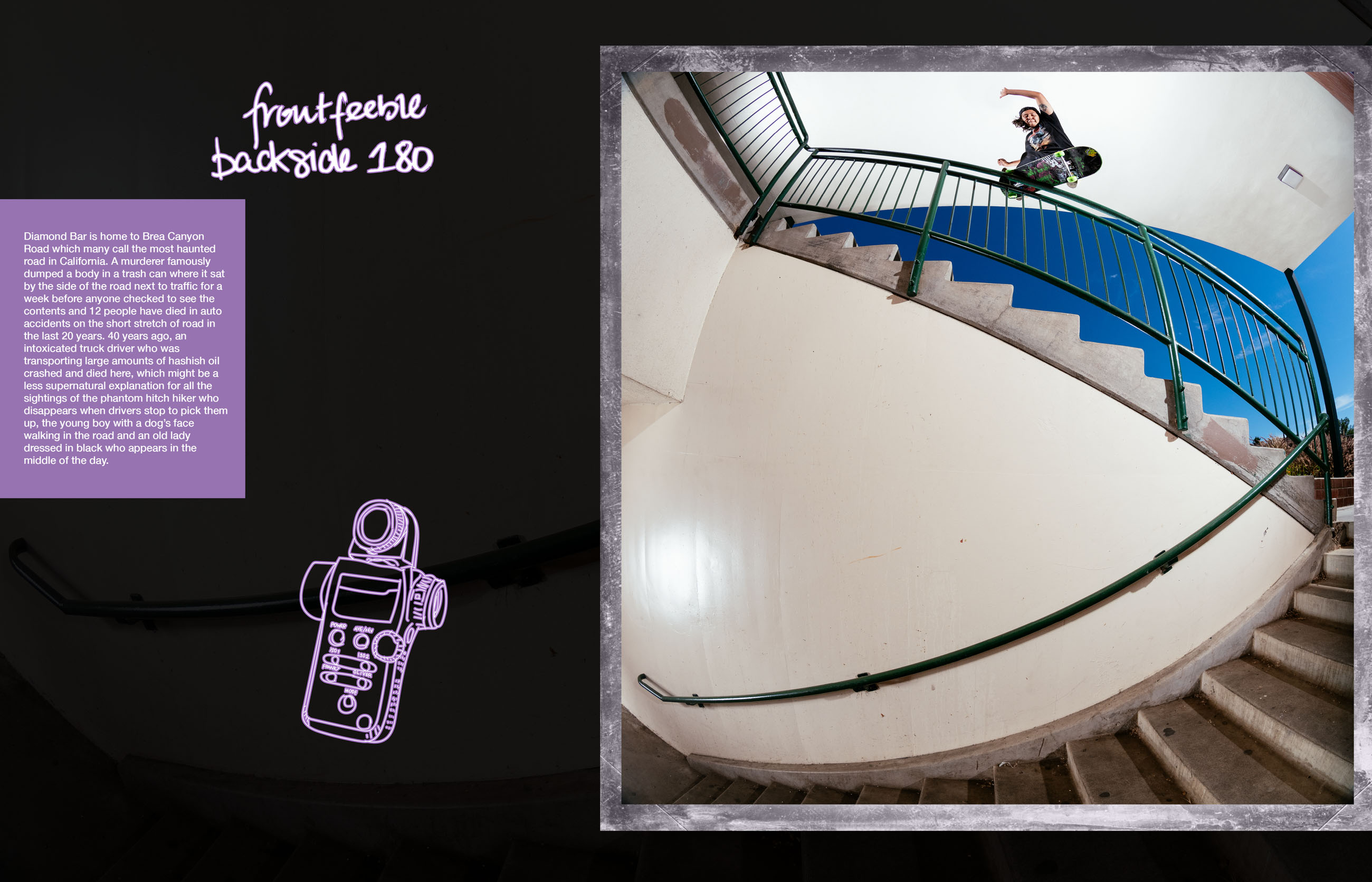 Diamond Bar is home to Brea Canyon Road which many call the most haunted road in California. A murderer famously dumped a body in a trash can where it sat by the side of the road next to traffic for a week before anyone checked to see the contents and 12 people have died in auto accidents on the short stretch of road in the last 20 years. 40 years ago, an intoxicated truck driver who was transporting large amounts of hashish oil crashed and died here, which might be a less supernatural explanation for all the sightings of the phantom hitch hiker who disappears when drivers stop to pick them up, the young boy with a dog’s face walking in the road and an old lady dressed in black who appears in the middle of the day.