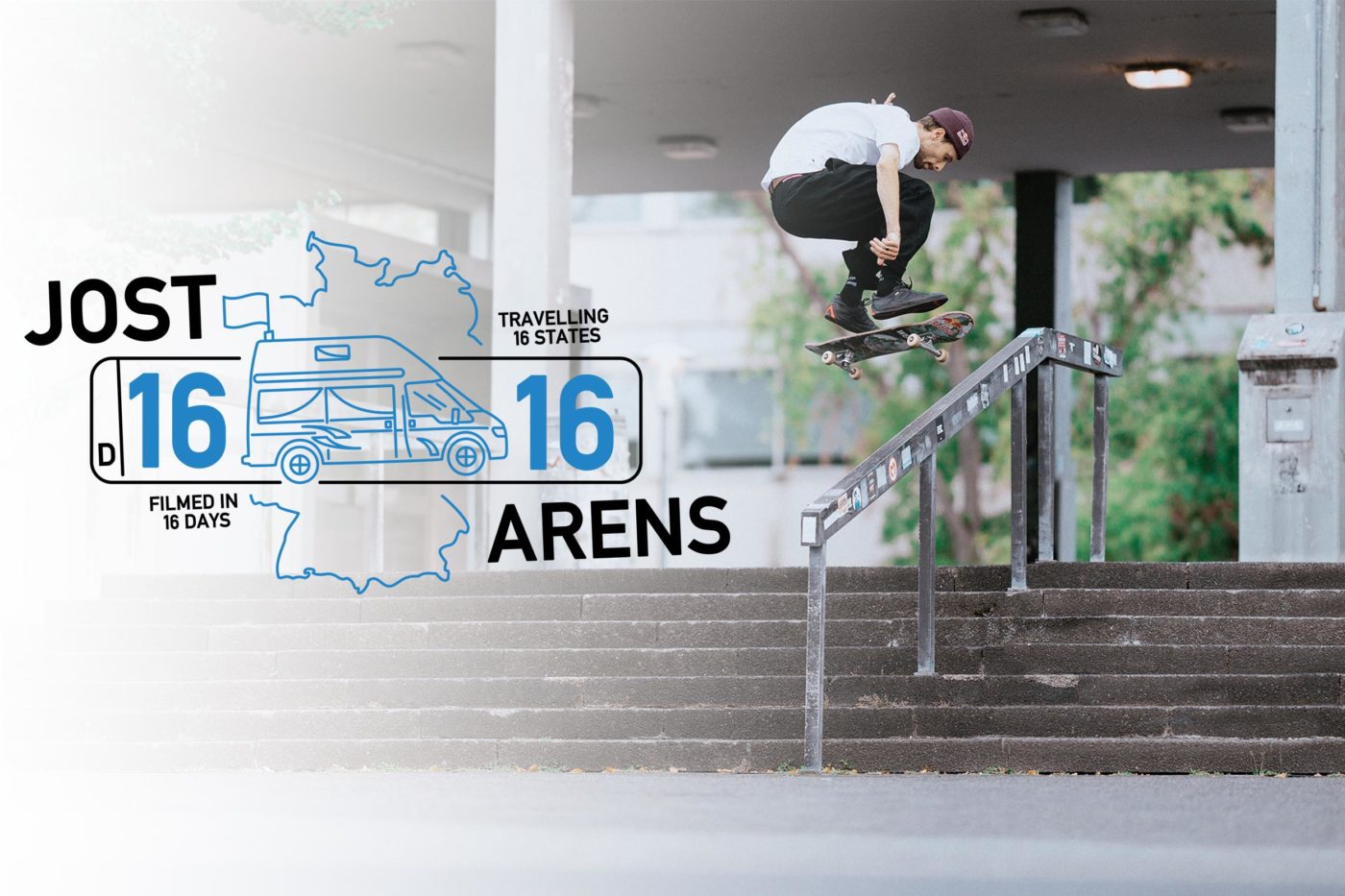 We planned and organized a lot of tours. It is always a bit of a concern weather you will get enough footage, if the weather will be fine, hopefully no one gets hurt, and so on. Well Jost took this to another level because he put all this pressure on himself and made it his mission to travel all of Germany’s 16 states in only 16 days and film at least one trick each day in each state. Like we said, we organized a lot of trips and usually there is one thing you can count on: don’t count on things going according to your plan. There are always challenges along the way. But in Jost’s case, we think it could not have gone any better. Spoiler alert: He actually filmed a trick in each state, did not get hurt, weather was fine exept for half a day and he even got a proper ender on the very last day. On top he met so many good friends and made new ones. Super stoked for Jost and Ludi, who put a lot of heart and love into this project. Enjoy and read along to find out more.

When did this idea first come up?
After watching “7 vs. wild”, I got really interested in camping and outdoor stuff. In the beginning, the plan was to do the route with the “9€ ticket” (editors note: a train ticket you could travel all over Germany, offered during Summer months of 2022), but I quickly put that idea aside after I saw how packed and delayed the trains are.

How did you choose the route?
We only had a rough plan. It was just important to us to film at least one trick in each state, in which city that would be we always left open.

How much time did it take to prepare this trip?
Not long at all! I told Ludi about the idea and he was immediately enthusiastic, so we rented a camper and off we went.

Do you remember the kilometer count of this trip?
It was almost 3500km.

Wow! Who was more about the van life, Ludi or you?
Definitely me, haha.

It’s so impressive! 16 days and you come home with a full part? Why can’t you do that every other month?
I was surprised myself when I saw that we have an 8 minute timeline.

This feels like a part but the order of clips is exactly how you filmed it. Was it the plan to get the ender on the last day?
I had already thought about which spot I could film an ender on. Fortunately it worked out!

What was your favorite city/ state?
Stuttgart probably has the most good spots in Germany.

Which city or state surprised you the most?
For me Wiesbaden and Mainz were surprisingly good!

I like to hear that since it’s my home turf. It’s easy to not appreciate your home country since you’re just so used to it. Did this project change anything about the way you look at Germany?
Germany is more beautiful than you think.

It was not only skating 16 days straight but also driving all over the country and then looking for a parking/sleeping spot for the van. How stressful was that?
You get used to it really fast. We always drove half the distance to the next town in the evening so that we only had to drive the remaining half the next morning. We always spontaneously looked for parking spots near a lake, so that we could always jump directly into the water in the morning.

Smart, good for the soul and makes a lot of sence. Skating for 16 days straight is intense! What days were the hardest to keep going?
Leipzig was super hard, it rained pretty much all day. Luckily we found a window of about 1.5 hours where we could dry a ditch and skate it.

What’s next? All US states in 50 days?
If someone comes along who will drive the car – I’m in, haha.

I’ll give it a thought. Thanks Jost!