POCKET VOL.8 & SIDE MISSION BOOKS ARE NOW AVAILABLE AT OUR SHOP!
October 2, 2017 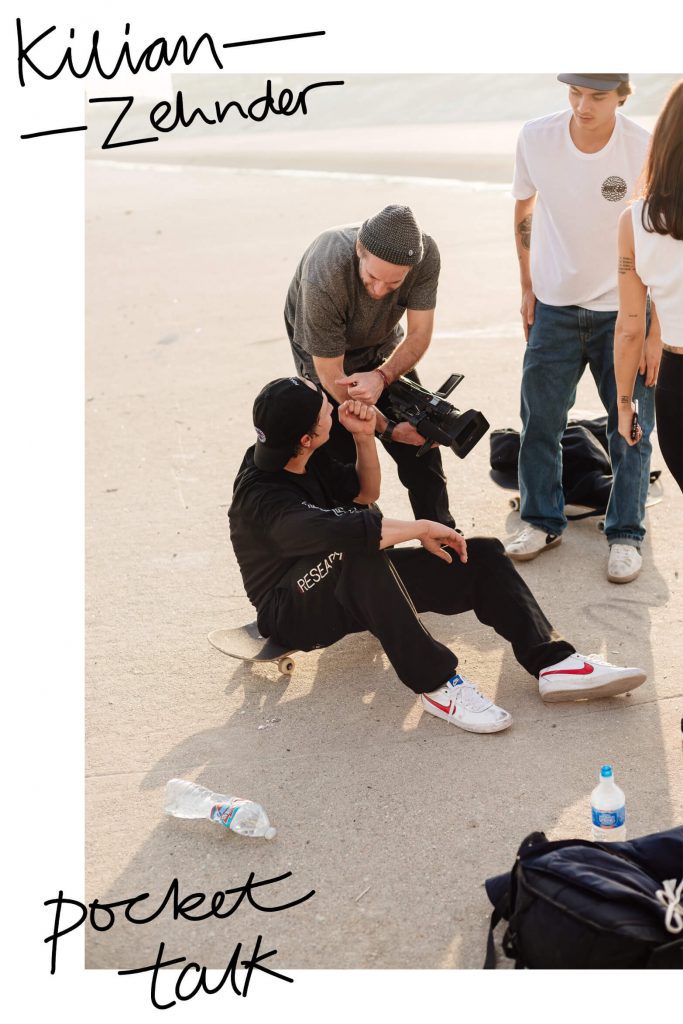 “Kilian is one of a kind. His chilled, laid-back attitude is obviously reflected in his skateboarding. Whether he’s skating rails, doing lines, jumping down gaps or handling hammers like a big dog, he always has a smile on his face and keeps everyone on the mission hyped. That´s why it’s always a pleasure to have Kilian around these days. Many factors that come from outside of the industry heavily influence skateboarding which makes it heading in a direction that I don´t necessarily agree with or care for. Kilian and other people with a similar mentality are the ones that are going to save skateboarding and keep it headed in the direction it needs to go.” Screw the bullsh*t, just skate!

Kilian – first of all, thank you so much for your trust in our new project and that you are down to be our first feature on Pocket.
Yeah, sure! I am happy for you guys launching a new magazine!

Where are you at right now?
I am in Barcelona right now and rented a room for two weeks. My girlfriend is here, too. We are skating and filming a lot every day, trying to get some new sh*t, …

Is your girlfriend from Barcelona?
No, we actually met in Los Angeles, where she is living right now. She is originally from Ecuador but lived in Spain for a while. We spent the past three months in Europe, mainly Barcelona and Switzerland. She is going back to Los Angeles in a month.
Most likely I will be joining her. It’s been a while since I have been in LA, always good to come out. And go skate with the homies out there, especially my brothers from Boulevard. We are currently filming for a Boulevard video.

Boulevard Video? What’s up with that?
The name is supposed to be “Amburger”. It’s focused on the ams. We’re filming full parts and the pros will share a montage. I am super hyped to film for it and already got a couple of clips.

When is the deadline going to be?
I think by the end of the year. Actually, as soon as everyone has got enough footage.

A lot of really good skaters come from small towns that give you a hard time pronouncing them. How about you? Are you straight from Zurich City?
Yap I grew up in the city of Zurich but in one of the districts at the edge of the city. It’s pretty chill and quiet there but it doesn’t take long to reach the center. You can even take a downhill to the city.

What does the skate-scene in Zurich look like?
We have a pretty big skate scene. It has grown pretty much in the past 5-10 years, I would say. There are a lot of crews. There’s our crew, the “Aitsch” Crew’, who we do a lot of videos with, but also other cool crews we’re all friends with.

To me it seems like Zurich now has made it to the international spot map, so to say. What do you think?
Yes, pretty much. More than before that’s fosho. Honestly, I always asked myself why no one was coming to Zurich, because there are so many good spots here. I figured it had to be that Zurich is a pretty expensive city. But this last Summer was tight! A lot of people came out. The Spitfire team, a few weeks later Miles Silvas with the homie Jesse from FOFA Hardware, a month later the McClung Brothers. There was a lot going on in Zurich this Summer. That was cool!

What’s up with FOFA Hardware?
FOFA is a label by the homies from Sacramento: Miles Silvas, Blue Turner, Jesse Welch and more… They started a small hardware brand two or three years ago and asked me if I was down to ride for it. I said ‘sure’! Every now and then they are doing little videos and articles on Thrasher. I’m stoked to be a part of it. They make funny shirts, too.

The first footage I saw of you that really stuck in my mind was from a part back in 2013. All filmed in Cali, 8 Minutes, good music and an even better trick selection. What’s the story behind it?
You’ve seen that part, really? (haha)
A good friend of mine, Angel (Saucedo), is living in Ventura, California. We met in Barcelona. Must have been Fall 2012 if I remember correctly. We skated there for two weeks. Angel and his friends wanted to stay a little longer so I let them crash in my apartment. He said if I ever wanted to come to California I could stay at his place, no worries. So I just went there for three months over the winter.

Did the Cali connection help pave your way?
Yeah, I think so. Definitely. Through Angel I got a pretty good connection to some big dogs, especially over in SF at Deluxe. Skating with him is really dope. He was always so motivated and down to have fun. He showed me a lot and taught me a lot of things I am still very thankful for today. Thanks doggie!:)

How many months a year do you usually stay in the US?
Who do you hang out with over there?
I would say about 4-5 month a year.
Hanging out a lot with my girlfriend since she lives in LA. So I either stay at her place or with the homies in Long Beach. The Brasilians: Tiago Lemos, Carlos Iqui, JP Souza, Vitor Borger. Also I have some real good homies from Texas, that I used to live with for a bit in the LBC. And for sure a bunch of homies that I always skate with at Cherry Park. And of course my Boulevarders too: Rodrigo Petersen, Rob G and Danny Montoya.

How are you allowed to stay in the US for that long?
I have a tourism and business visa. I applied for it three years ago. I went to the embassy and explained that it’s important for me to be in California, because I make a living off skateboarding. They wanted a written confirmation from my sponsors, so Colin Kennedy, my Nike SB team manager back then, wrote a little letter for me. After that, they gave me a 10-year visa. I can stay in the US six month at a time. But most of the time I only do two or three until I want to go back to Europe.

Would you move to the US if you could?
No, I’d rather not. I like Europe too much. And I’ve got my whole family here.

You seem to be a lot on the road with our dear friends Bryan Callaghan and Anthony Claravall?
We have been on a lot of trips in the past years. I have actually not seen them for a while but I am sure the next trip will be coming soon!

Where have you guys been for your Official part?
We did some trips to Mexico and Korea with the whole Official Team. With Anthony, I have also been to Amsterdam and Portugal. I liked Portugal very much! We did a tour from north to south. There are a lot of good skate spots, it’s been a blast!

I’ve heard that you speak Portuguese?
Yeah, I am learning it right now. It’s super fun. I’ve had Spanish in school and always made use of the language when I was in Spain. When I met Carlos Ribeiro on a LRG trip he offered me to stay at his apartment in Long Beach. There were only Brazilians there and they talked Portuguese the whole time. It sounded a lot like Spanish to me. So I wanted to learn it and the ‘Brazas’ helped me a lot! I also use an App to learn the language. Now I can speak it a little. Also, I have been to Brazil two times already and really liked it over there.

Are you living healthy?
I try to pay attention to my diet: healthy, a lot of fruits and vegetables, fresh and not too much industrial food, preservatives and all that sh*t. I am also doing a remote training program to become a nutritionist for naturopathy.

Gossip Time: Word on the street was that you were offered to ride for Numbers Edition? What’s behind all that?
That was just Rodrigo TX telling me that it could be possible for me to ride for Numbers if I was down to. I know TX and Miles pretty well from all the Official trips. But I talked to Boulevard before that, or rather to Rodrigo Petersen. I have known Tiago Lemos, Carlos Iqui and Rodrigo Petersen for some time already and it felt more natural to me. More with the homies. Numbers was almost a little bit too much for me.
Right from the beginning Boulevard said that they have no problem with me being in Europe. One of their slogans even is “Building Bridges Worldwide”. So I decided to go with Boulevard.

That’s why it didn’t take long for you to find a new home after Organika went out of business?
Right. After Organika I didn’t know what to do for two or three months until I decided to go with Boulevard. Now I am more than happy. Everything is super. The team, the video we are working on… I am really super happy to be a part of Boulevard!

What are your plans for 2018?
Keep it going. Skate a lot, film a lot. To be honest, also try to get more photos, that’s kind of hard for me sometimes. But mainly just let the good times roll on.

Sounds good! Thank you for your time, hopefully see you soon for a session!
Yeah doggie, my pleasure!

-Kilian would like to give out huge thanks to his family and friends as well as to his sponsors, whose support is really appreciated –