POCKET VOL.8 & SIDE MISSION BOOKS ARE NOW AVAILABLE AT OUR SHOP!
December 5, 2017 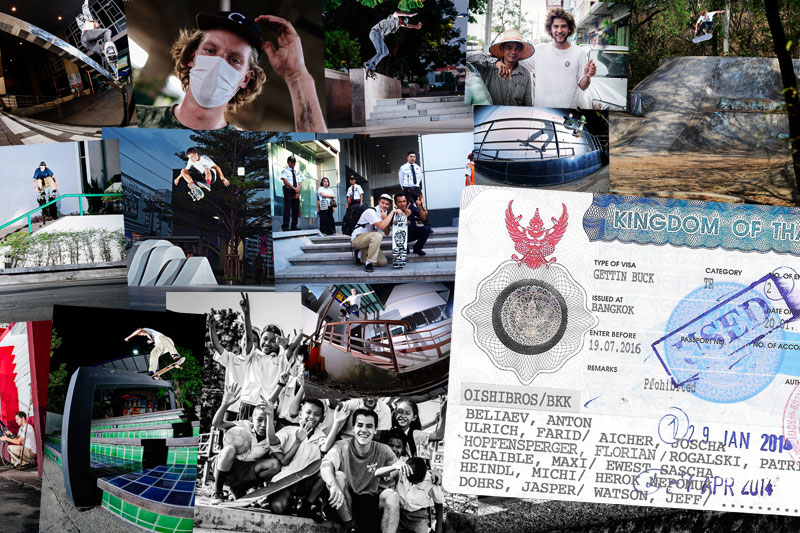 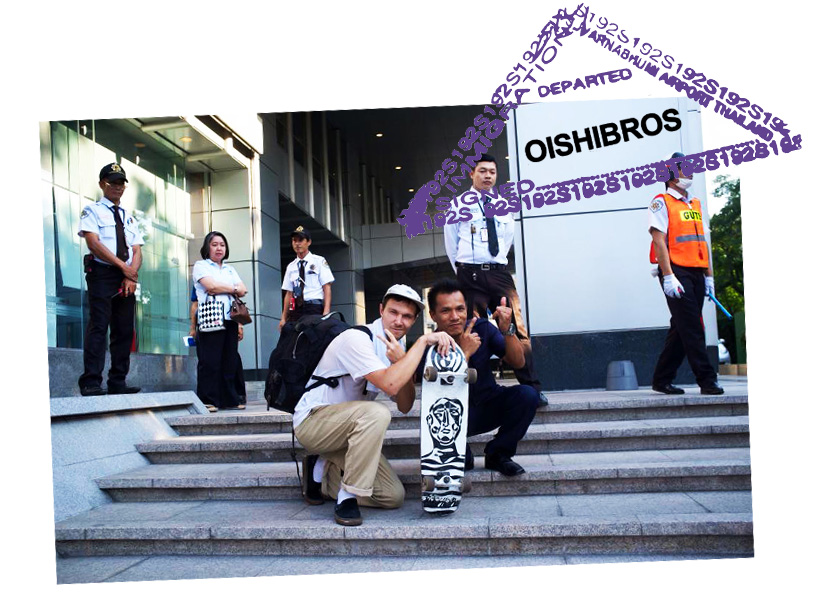 When a group of skaters explore the road together it becomes more than that. A crew vibe starts kicking in and a bond is created.
Especially if you are skating in the exhausting Bangkok heat. Stopping at 7/11 to stay hydrated is mandatory and Oishi ice tea became the beverage of choice.
The Oishi Bros were born. At first, we didn’t even know that “oishi“ was Japanese for delicious, but when we found out, it made even more sense, haha!
Anton Beliaev spent the winter of 2015/16 in Bangkok, always filming with the crew and is now releasing this montage.
It’s crazy to see how many people found their way to BKK to escape their local winter.
Two years later it’s finally time to reminisce and warm ourselves up with 11 minutes of Bangkok heat!

We talked to Anton about his time in Thailand, what life in Russia was like and what he is up to nowadays:

Where are you originally from?
I’m from St. Petersburg, Russia. The most eastern part of the Baltic sea. It’s also “A window to the west” in Russia.

How come you picked up a skateboard?
I played Tony Hawk’s Pro Skater 2 a lot. Then I asked my mom to buy me a skateboard. I thought it will be the same cool and easy. It was cool, but not as easy as I thought.

How come you moved to Bangkok?
It was just a winter escape for 4 months. I knew Burny lived there, so I decided to spend a winter in Bangkok. Better than getting frozen and doing nothing when it’s -20 degree C (-4 degree F) in Russia.

How did you get to know skaters over there?
I have known Burny for a while. I met him one year ago, also in Bangkok, when I was there for the second time during my 6 months South-East Asia trip in 2013/14. Samu Karvonen, who is a friend of mine from Helsinki, was there. He was on a trip with Lucas Fiederling while they were filming for “Where we come from”. And then I just met everyone else through Burny. He is a local G in Bangkok.

When did you know it was time to move on to the next destination?
My Thai visa expired in April, 2015 and the winter in Europe was already over, so I just moved to Berlin for 3 months as it is a city which I really like and feel comfortable in. After that, I went back to St. Petersburg for a while and then I managed to get a German residence permit.

Why Germany?
First it all, Berlin is not Germany. A lot of factors play part:

– I grew up with a huge Finnish mentality, which I really liked. But Finland is kind of boring to live in. And the German mentality is somewhere between the Finnish and Russian mentality, so it is not quite like in Finland and not as chaotic as in Russia.
– I really like “Ordnung”: Order.
– My dream has always been to become a skateboarding filmmaker. It’s actually impossible to earn money for filming skateboarding when you live in Russia. Even in Berlin it is still hard to follow that dream, but I´m still trying to catch up to that.
– Berlin looks like a renovated St. Petersburg: with the same old buildings in the city center and panel houses on the edge of the city. That’s why I did not change my habitat area that much.
– Berlin is a multicultural city and a place where you can really breathe freedom. I feel a deficit of those vibes in St. Petersburg.

How could your friends help you with that?
First of all I managed to get a lot of testimonials from brands and companies with whom I already worked. It was needed for appeal. In the beginning I also lived with two friends of mine, Leon Kudaru and Nikolay Gamasin. After that, Farid Ulrich helped me with a flat for 2 months before I managed to get my own apartment. It’s not so easy to get a flat in Berlin, even for Germans. I know a lot of skaters who have been living in Berlin for a long time but still don’t have a registration. To me, all those bureaucracy things were really important to get a resident permit. Also, I got a lot of advice on how to get through German bureaucracy.

What has been your favorite place to live so far?
I travelled a lot and visited more than 50 countries, but I only lived in St. Petersburg, Bangkok and Berlin for long enough to understand the city as a citizen, not as a tourist. In my opinion, Berlin is the best. It’s still affordable for living and there are a lot of opportunities to improve your skills in everything that you want. I started my second higher education here and now I study Film and Motion Design. Berlin has the best people from all over the world, so it’s the place to be.

You said Russia is pretty chaotic. Are these dashcam car driver videos realistic or just a cliché like Germans eating sauerkraut all day?
Yeah, it is all true. The culture of driving in Russia is on a really low level. People do not care about their own and other lives. They live for today and do not think about the future. It’s a huge problem for Russia in every part of life. You can see it especially because russians have a higher level of a global warming scepticism. They don’t care about the future on the earth at all, not only in Russia.

Any crazy story you could tell us?
In 2009 I hitch-hiked from Beslan to Vladikavkaz in Ossetia Republic. It is located in the North-Caucasus region. There was a dude who sold pita bread on the side of the road. He said that he could bring us to Vladikavkaz when he was finished selling this pita bread. There was only 5 left, so we bought them all. It was only 2,5 Euro for everything. We ate that pita-bread for the next few days as they were huge. Then he brought a sheep over from the corner and put it in the trunk. We sat down in that really old car, a Lada. So it was 5 people in the car including the driver and also a sheep in the trunk. It was so overweight that the bottom of the car almost kissed the road. He drove like as psycho, going 100 mph which felt like going 250 mph in that Lada. In addition to that, the safety belts were missing. He just cut them out. Eventually, we finally got to Vladikavkaz and the driver said: “I would love to show you the city, but I’m worried about that sheep in the trunk dying.“

Do you think you are going to move back to Russia one day?
If the German government decides not to extend my resident permit, then I will have to. In other cases – no. At this moment everything is fine. I study, then I have to get a well-paid job and pay taxes to the government. The German government needs high educated, good tax payers.

Any advice to the youngsters out there who want to travel the world on a budget?
First of all, earn some money. Then manage your budget carefully while traveling. Try to get paid for some freelance stuff while traveling. And do not forget to buy a fanny pack, in case somebody is trying to rob you.

What’s up next? We saw your ”Geliebtes Berlin“ video. Any new projects coming up?
I have  two  really great ideas for videos which I would like to film. At least I think that these ideas are great. No one in skateboarding did it before. At the moment I try to find a budget for that. It would be nice to  realise at least one of the ideas.

Thank you very much for taking the time to talk to us!
Thank you Johannes! Nice that you guys started another cool skate media project.  The more variety, the more interesting.