Pocket: Los Angeles is our first video. We took a bunch of very talented skateboarders to the City of Angels to let them do what they love. It’s uncertain if we spent more time in our van or at spots but for sure the squad was out all day, every day, even at night. Three weeks with a lot of 4/20 resulted in 8/20 minutes of pure joy.

A Video by Dennis Ludwig 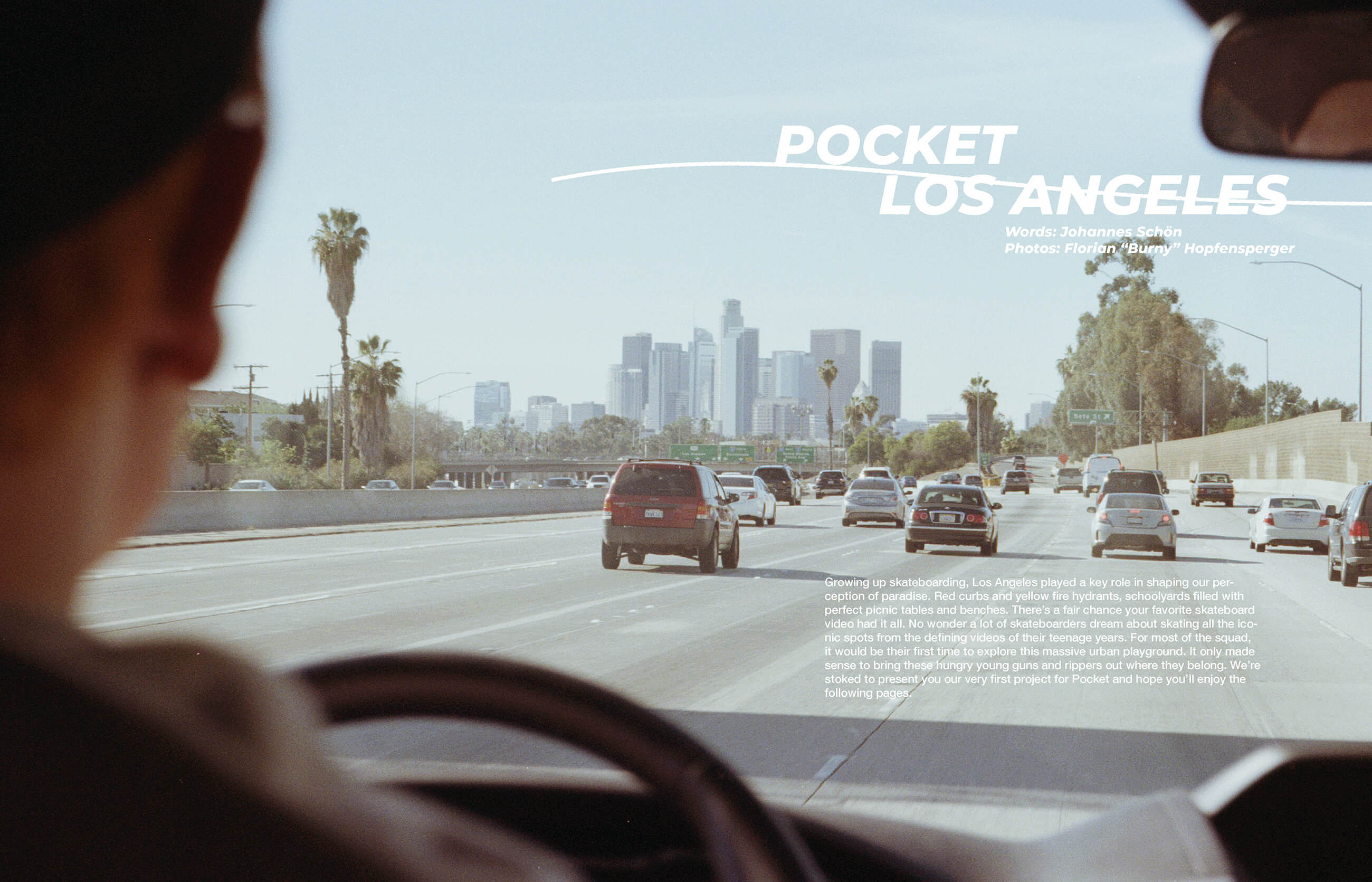 Growing up skateboarding, Los Angeles played a key role in shaping our perception of paradise. Red curbs and yellow fire hydrants, schoolyards filled with perfect picnic tables and benches. There’s a fair chance your favorite skateboard video had it all. No wonder a lot of skateboarders dream about skating all the iconic spots from the defining videos of their teenage years. For most of the squad, it would be their first time to explore this massive urban playground. It only made sense to bring these hungry young guns and rippers out where they belong.

Traveling goes hand in hand with having a bucket list. Joscha’s Switch Frontside Boardslide was at the top of the list, followed by the creation of his very own In-N-Out burger with over five patties. He managed to cross these two off within the first few days. Well, In-N-Out got actually crossed off within his first-ever hour spent in the US, clearing his mind for future adventures. 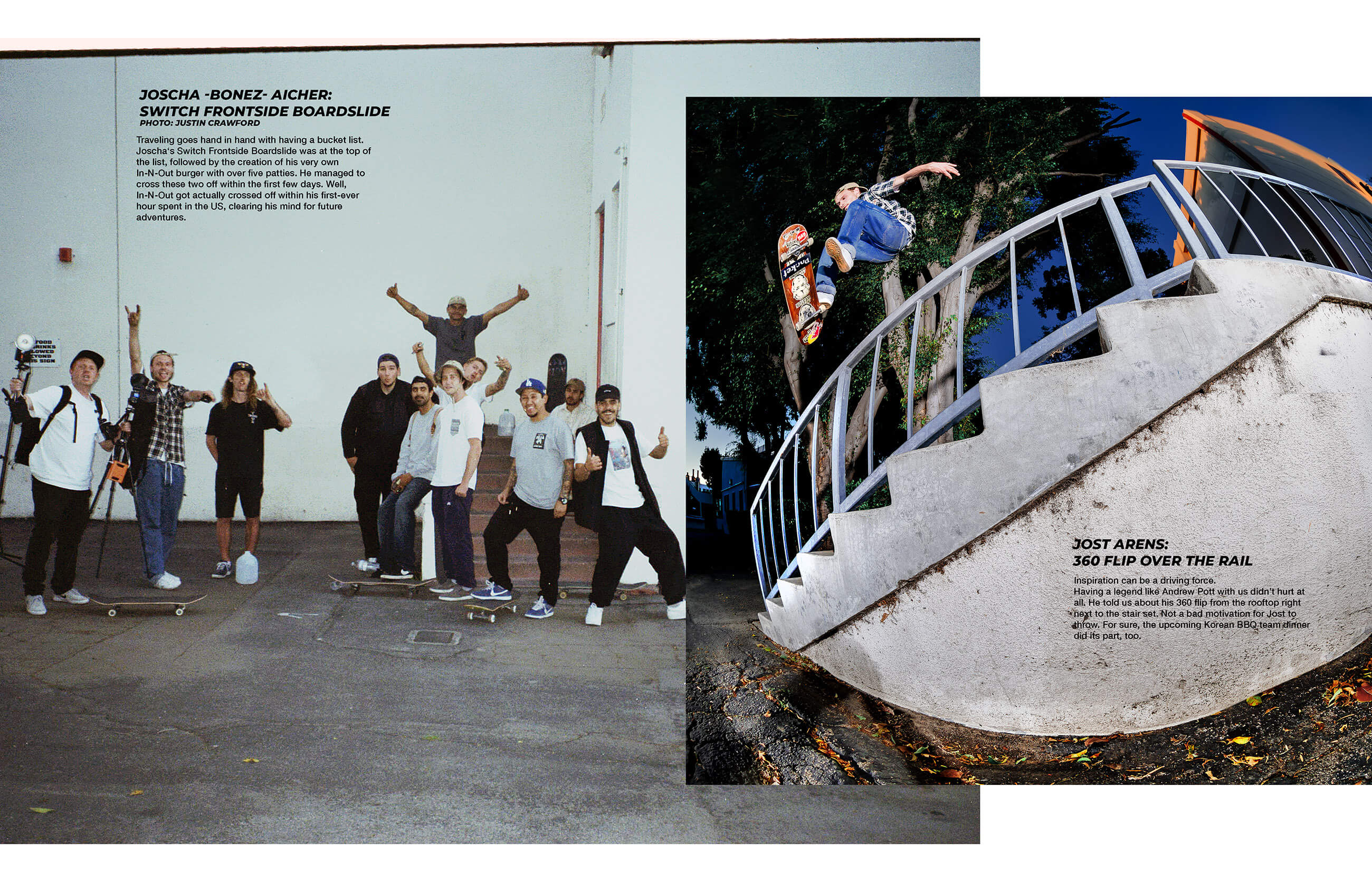 JOST ARENS: 360 FLIP OVER THE RAIL

Inspiration can be a driving force.  Having a legend like Andrew Pott with us didn’t hurt at all. He told us about his 360 flip from the rooftop right next to the stair set. Not a bad motivation for Jost to throw. For sure, the upcoming Korean BBQ team dinner did its part, too. 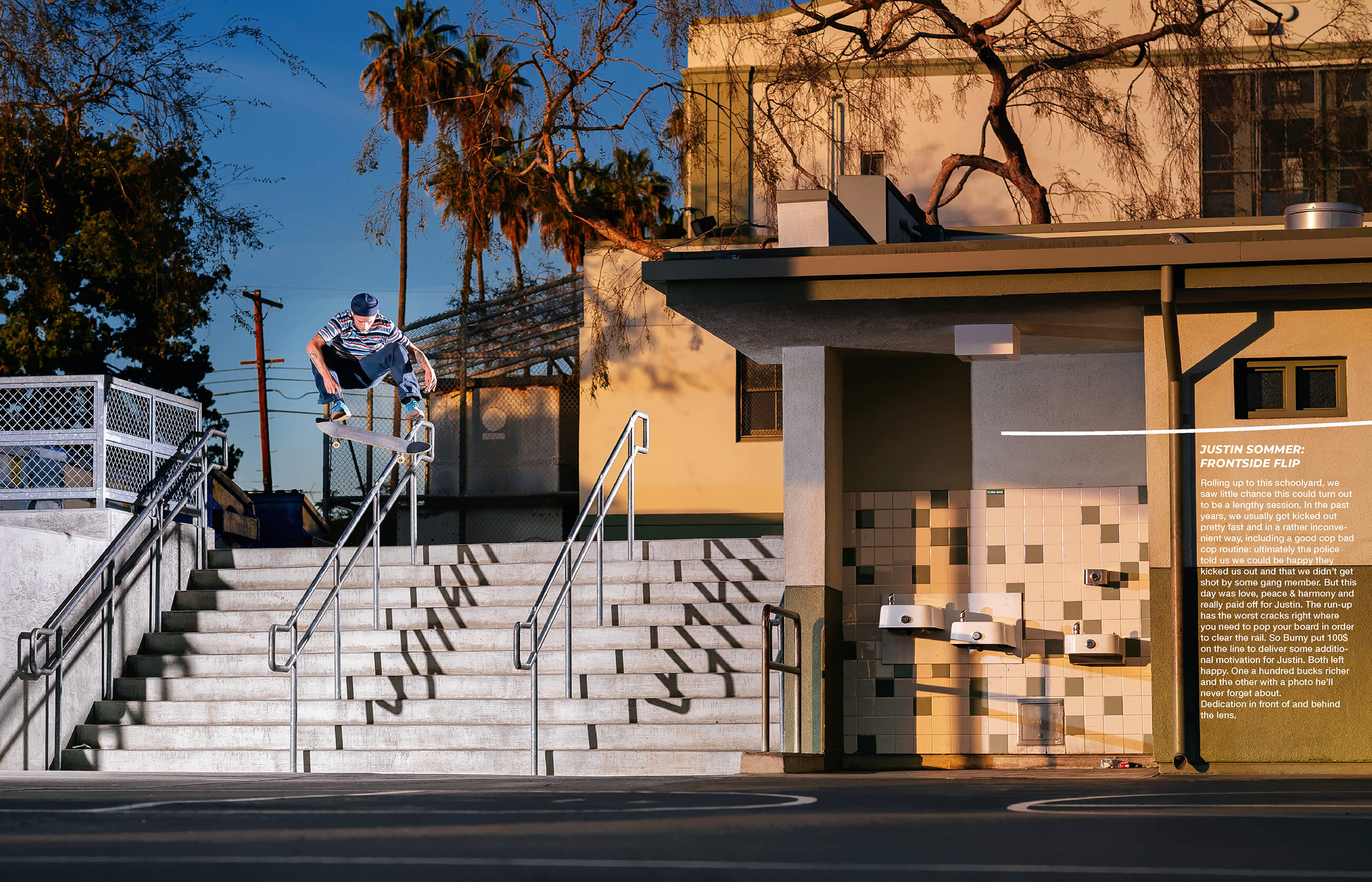 Rolling up to this schoolyard, we saw little chance this could turn out to be a lengthy session. In the past years, we usually got kicked out pretty fast and in a rather inconvenient way, including a good cop bad cop routine: ultimately the police told us we could be happy they kicked us out and that we didn’t get shot by some gang member. But this day was love, peace & harmony and really paid off for Justin. The run-up has the worst cracks right where you need to pop your board in order to clear the rail. So Burny put 100$ on the line to deliver some additional motivation for Justin. Both left happy. One a hundred bucks richer and the other with a photo he’ll never forget about.
Dedication in front of and behind the lens. 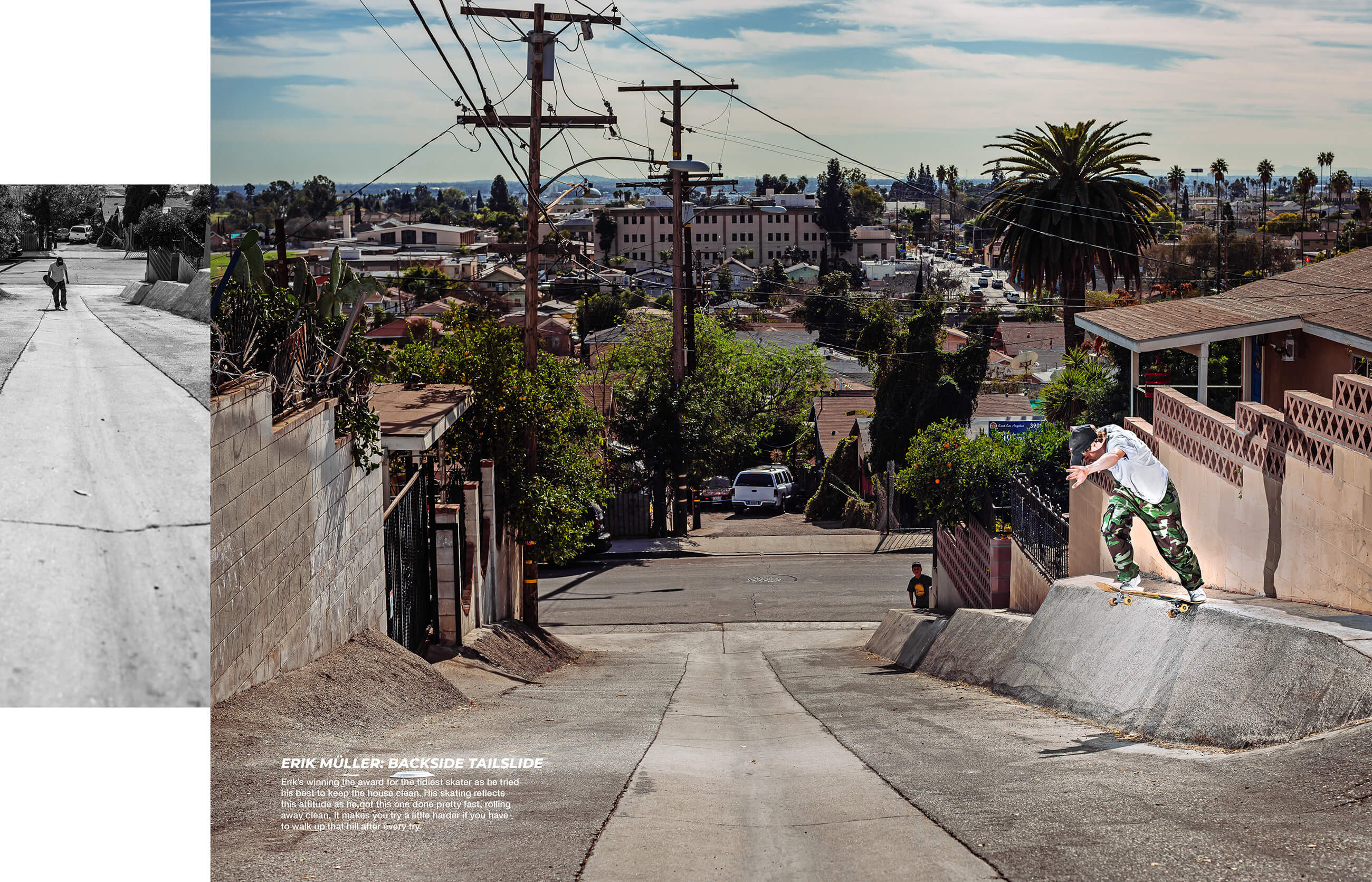 Erik’s winning the award for the tidiest skater as he tried his best to keep the house clean. His skating reflects this attitude as he got this one done pretty fast, rolling away clean. It makes you try a little harder if you have to walk up that hill after every try. 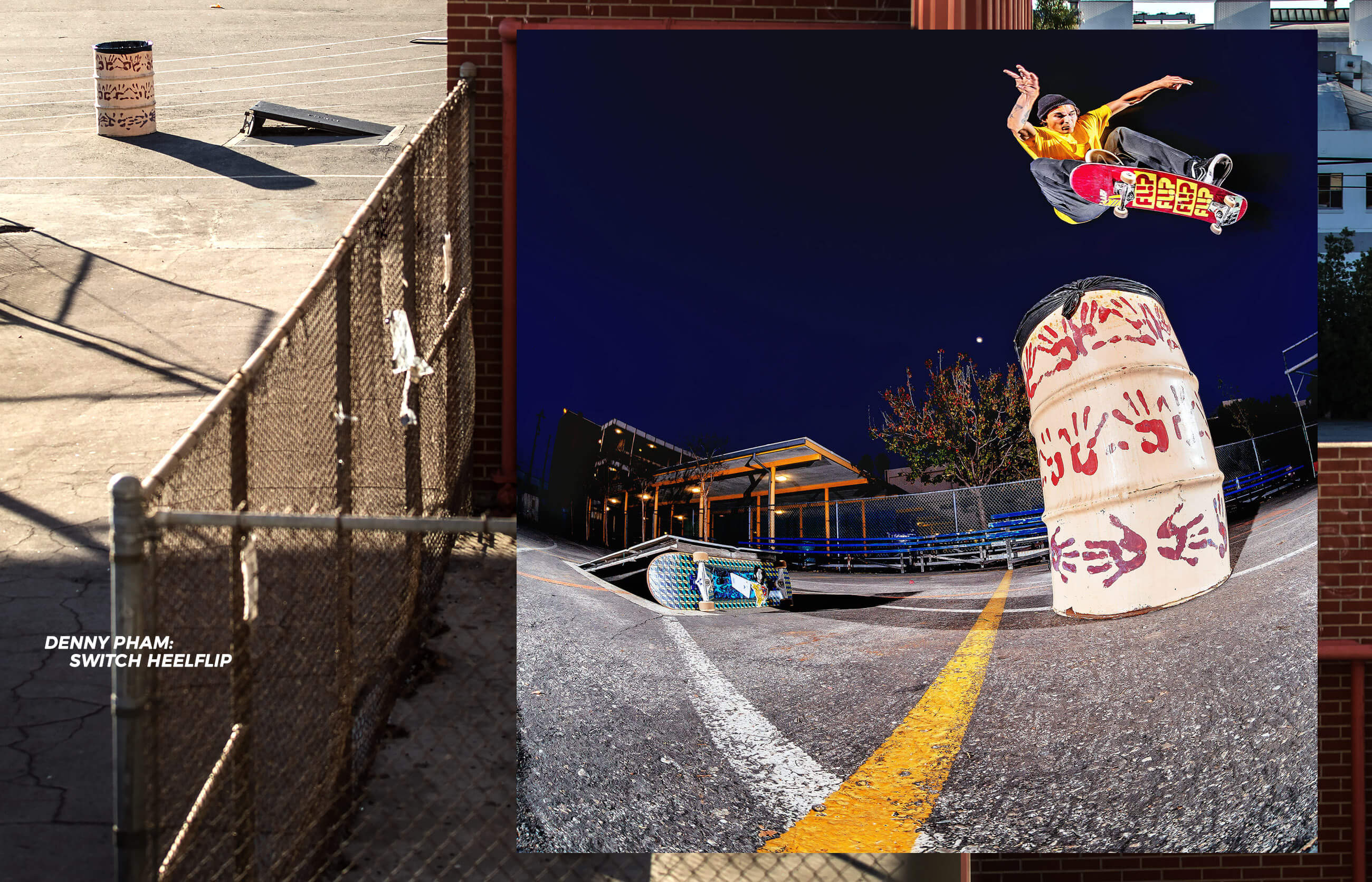 We had a truly magical session at this classic L.A. schoolyard. Our friend, Andrew Pott gave us a tour and showed us the famous roof gap he hardflipped back in the day before the boys went to work. Just when it got dark Denny had the idea to switch heelflip the bump of trash can. Perfect trick for a perfect spot. An OG combination that never disappoints. 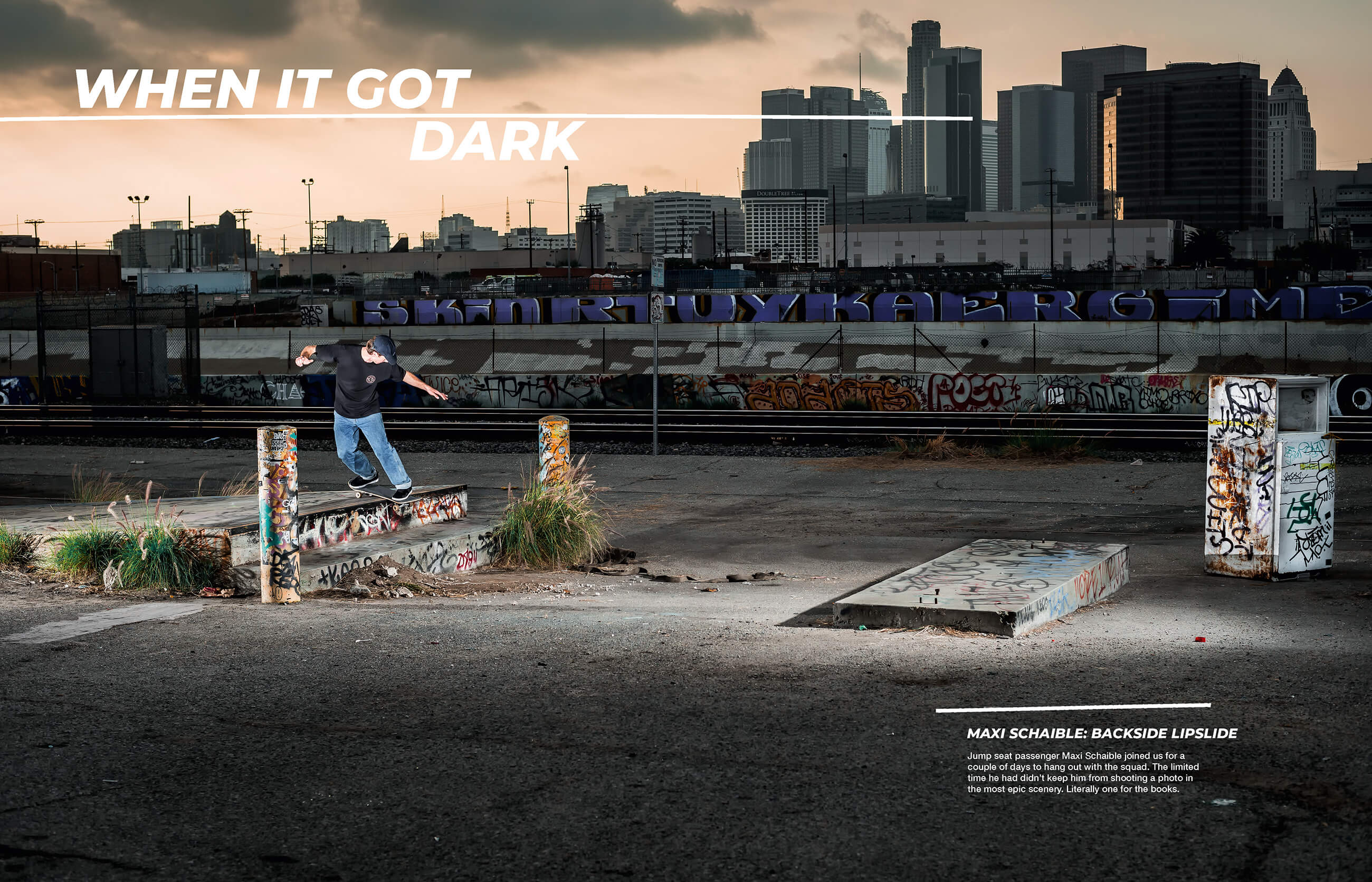 Jump seat passenger Maxi Schaible joined us for a couple of days to hang out with the squad. The limited time he had didn’t keep him from shooting a photo in the most epic scenery. Literally one for the books. 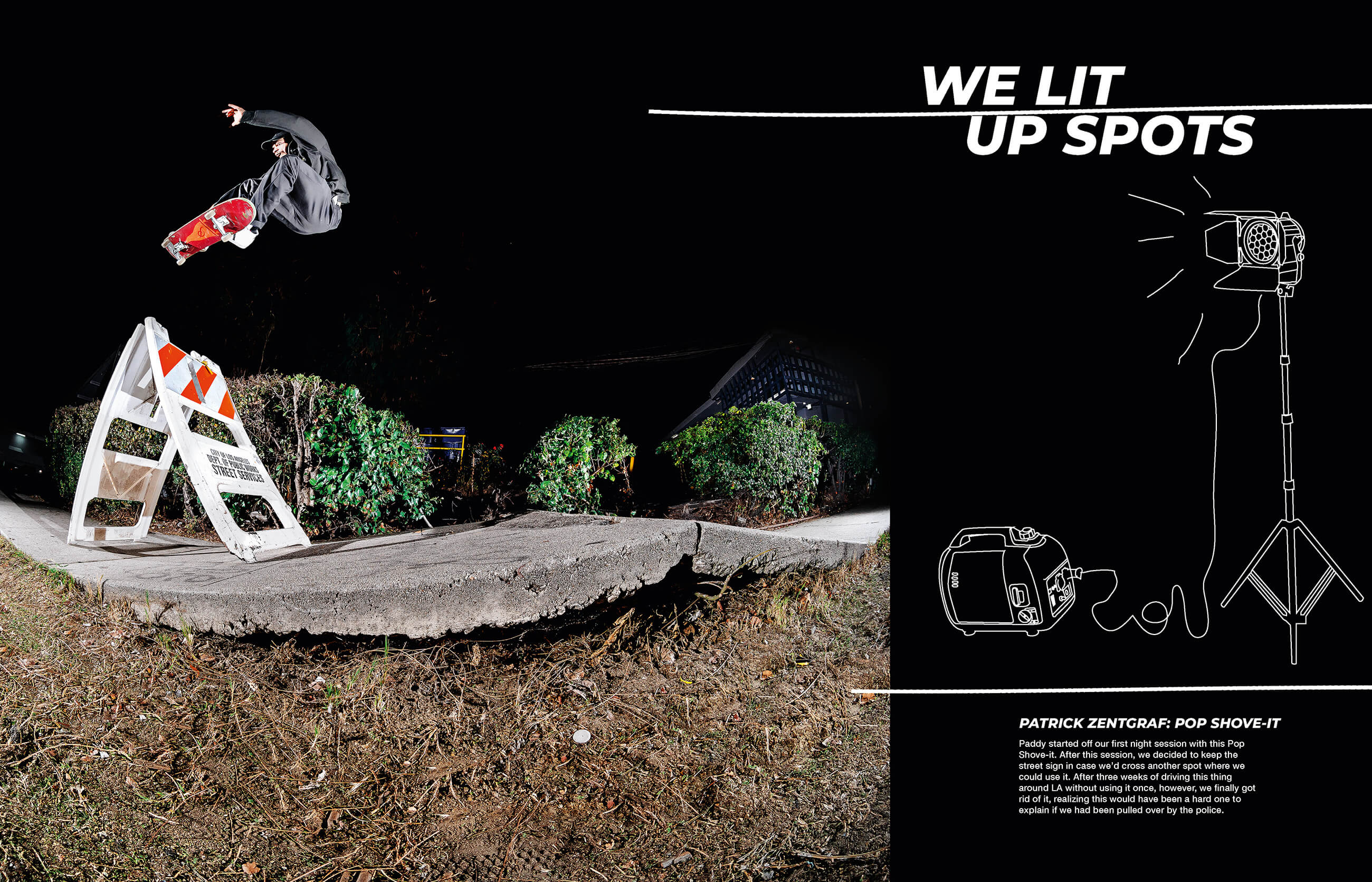 Paddy started off our first night session with this Pop Shove-it. After this session, we decided to keep the street sign in case we’d cross another spot where we could use it. After three weeks of driving this thing around LA without using it once, however, we finally got rid of it, realizing this would have been a hard one to explain if we had been pulled over by the police. 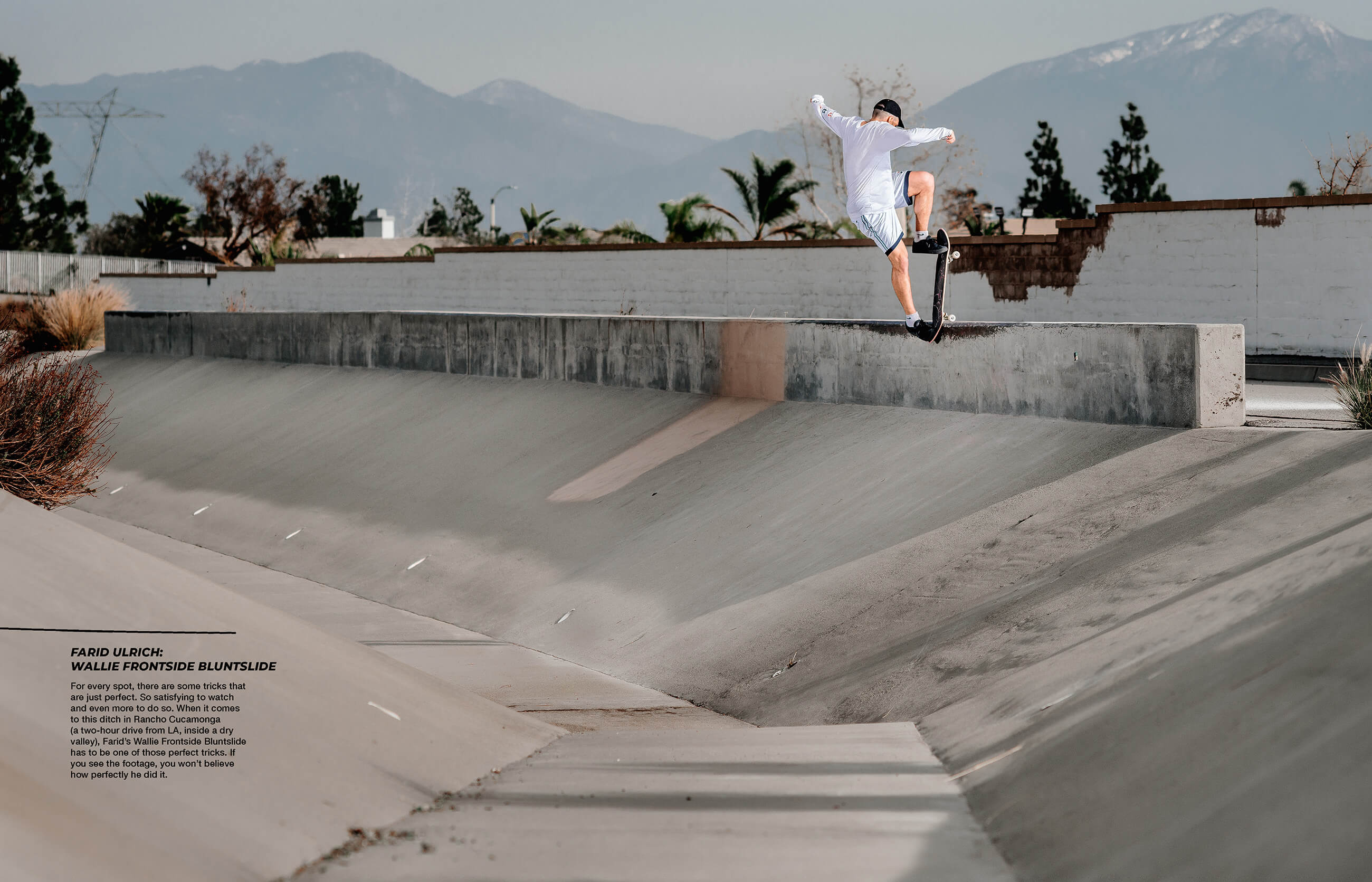 For every spot, there are some tricks that are just perfect. So satisfying to watch and even more to do so. When it comes to this ditch in Rancho Cucamonga (a two-hour drive from LA, inside a dry valley), Farid’s Wallie Frontside Bluntslide has to be one of those perfect tricks. If you see the footage, you won’t believe how perfectly he did it. 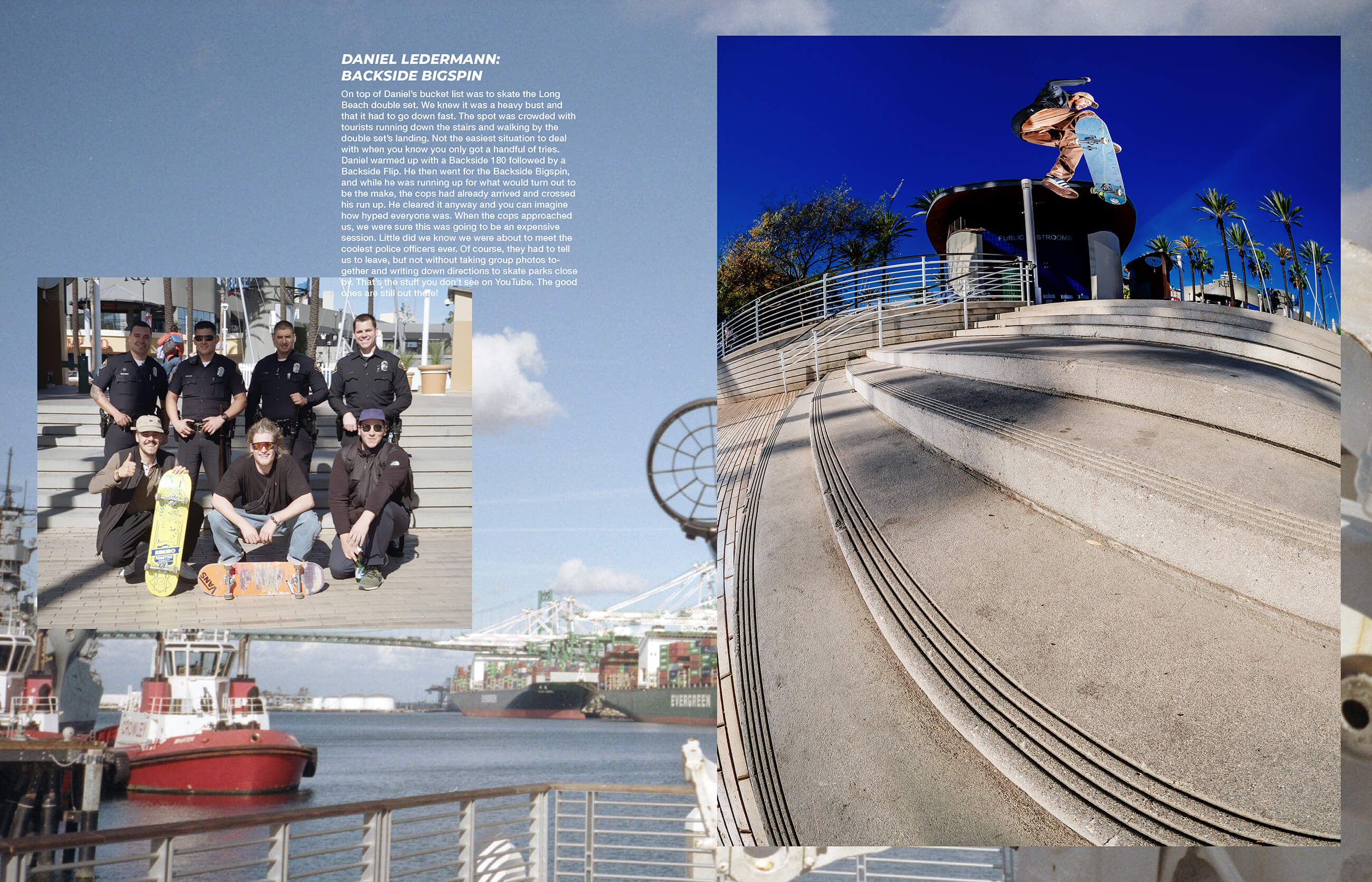 On top of Daniel’s bucket list was to skate the Long Beach double set. We knew it was a heavy bust and that it had to go down fast. The spot was crowded with tourists running down the stairs and walking by the double set’s landing. Not the easiest situation to deal with when you know you only got a handful of tries.
Daniel warmed up with a Backside 180 followed by a Backside Flip. He then went for the Backside Bigspin, and while he was running up for what would turn out to be the make, the cops had already arrived and crossed his run up. He cleared it anyway and you can imagine how hyped everyone was.

When the cops approached us, we were sure this was going to be an expensive session. Little did we know we were about to meet the coolest police officers ever. Of course, they had to tell us to leave, but not without taking group photos together and writing down directions to skate parks close by. That’s the stuff you don’t see on YouTube. The good ones are still out there!