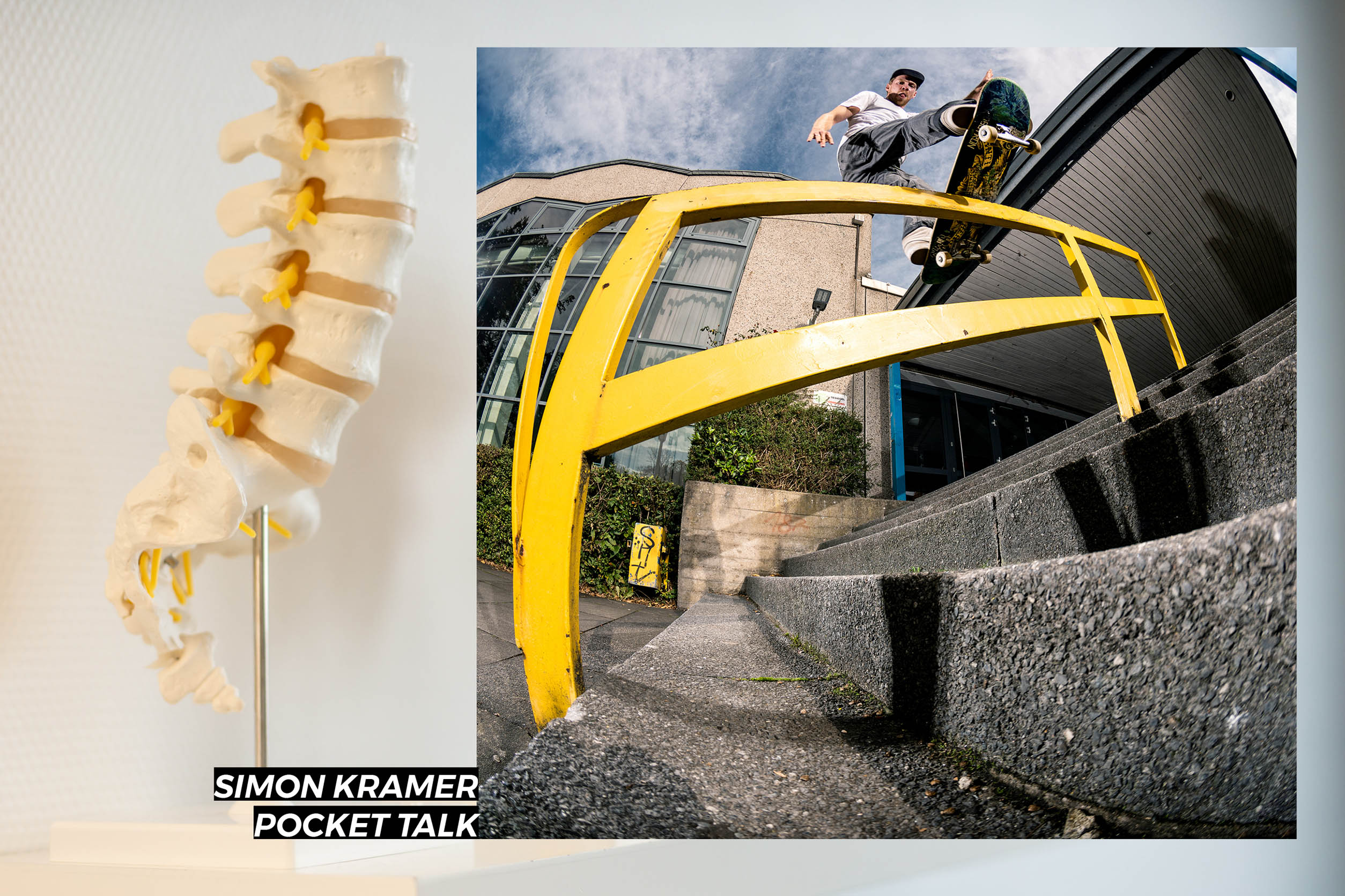 Hi Simon, can you give us a little introduction? When did you start to skate and at what time in your life did you decide to take the route as a medical professional?
Hi Johannes, thank you for your time. My name is Simon J. Kramer, I’m 41 years old and I live in Cologne with my beloved wife Lena, our 6-year-old son Julius and our Dog “Tofu”. I started skateboarding in 1988. I was a lively kid and did lots of sports like Athletics, Judo, Tennis or Football. But skateboarding became my passion.
When I primarily concentrated on riding a skateboard and had knee pain my doctor said, skateboarding is not a sport and won’t be able to properly walk at age 20 if I would continue.
So when I finished school and realized I won’t make it as a professional skater I decided to become a sports doctor. It motivated me to be there and help kids doing what they are passionate about and not telling them it’s not a sport. For me, the perspective was to combine Skateboarding (and sports in general) with medicine, to become a doctor who understands skateboarding injuries and keep the professional focus on doing what you love as long as possible.

“My clients are mostly young athletes and skateboarders. But also surfer, snowboarder, bikers are coming more and more”

Sounds like the doc we all need!
I’ve had similar experiences and I bet most skaters did with people telling them they will ruin their body and should rather stop doing what they love.
It’s pretty rare to come across a doctor who also skates and understands our problems on different levels. Do you work with a lot of skateboarders?
I can feel you!
I’m an orthopedic surgeon and sports traumatologist, manual therapist, and emergency doctor so my clients are mostly young athletes and skateboarders. But also surfer, snowboarder, bikers are coming more and more. That fact probably comes down to my Instagram @Sk8docsimon where I document and share things interesting for these groups of people.
Plus, I’m one of the consulting doctors for some German Olympic Kader athletes.

Besides that, did you ever get to work with other pro skaters?
When I heard that the XGames and are coming to Munich for the first time I knew that I had to be there. So it worked out that I was the doctor of their medical team taking care of the SLS athletes.
My first contact was Evan Smith who suffered a couple of bruises. With Chris Cole I had long conversations after he rolled his ankle. That was very interesting for me because he is more my age and we talked about injuries and stuff along those lines. It was fantastic treating him so he could go on skating the contest.

So mostly SLS?
Some X-Games stuff, too. I had to take care of the big air contest and Jake brown got knocked out after he hung up on the coping and landed in the flat right in front of me. After we stabilized his spine we got him ready to get to the first aid tent. He woke up and said everything was cool and he just wants to relax. I body checked him, we had nothing! He actually wanted to continue skating the contest. But knocked out means X-Games are over for you.

Wow, what a tough human being. Was that the gnarly slam everyone remembers?
That one was in 2007 and the Munich one 2013. It happened in practice which is probably why I couldn’t find footage of it, but it looks pretty much the same.

The man’s a cat! Unbelievable to walk away from these, essentially twice!
Personally, I have seen a lot of bad injuries happen and each one made me more sensitive and scared for something happening to me. Day in day out you are dealing with people’s injuries – how do you manage to not let this get in your head too much when you skate?
Most of the time I try to stay super focused and skate within my abilities. When the session is on I’m always ready to fall.
I kind of like falling, it comes from my time doing Judo.
We went to a spot the other day and a friend of mine told me about an injury someone got there. That kind of irritated me and during run-up and I slammed the same way.

Do you see any difference in the way skateboarder-bodies are structured compared to other athletes?
There are many types of body shapes in skateboarding.
From the super athlete that never parties, has a training plan and perfect nutrition to the ripper who just stays fit by skating every day and doesn’t watch his diet too strictly.
In the end, it comes down to age. For most people, the shift in perspective comes at the ages 30-50 when you still want to keep skating at a certain level.
When looking at pro skaters it appears the perfect physiognomy for jumping down big stuff seems to be not too tall or heavy. Like a Willow or Chris Joslin. Taller guys like Tyshawn will have it easier to pop really high and jump over nearly anything.
I’ve read nearly all reviews concerning skateboard injuries and did a little study comparing the strength and tendon thickness of the front vs. back foot. All boardsports work sideways with the stances regular and goofy and are not frontal like rollerskating. We measured the strength of the leg and Achilles tendons on the thickness and found out that there are symmetrical structures.
I had hypertrophy in my front thigh because I don’t skate switch too much which brought me to the idea to look into this in detail. But turns out generally the bodies are pretty balanced due to rotation, landing, etc.

So what can people do to keep it going for eternity?
Staying fit in daily life. For example by riding the bike all the time which is good for joints, muscles and cardio, taking just every second (stair)steps for leg strength, doing regular sports like 2-3 times a week. Make sure to pay attention to core stability and flexibility in general.
Focus on good plant-based nutrition which means for me: as vegan as possible! Because in studies you see that animal proteins have a negative influence on healing processes, pain and arthritis. We did several interviews with pro athletes who finally recovered and going vegan was a game-changer.

Not a lot you have to do but still, I’d wish there was an easier way. Why is it what recovery time takes longer as you get older? That’s at least my experience.
Since we come from being hunter and gatherers our bodies need much movement. Moving around all day is in our genes, working eight hours a day isn’t. We need healthy food, many vegetables. The older we get, the slower healing processes work. The faster muscles disappear. In the first 20-30 years in life nearly everything is given to you, but after that, you need to fight harder and harder to come back.
The cell separation on the molecular level works slower when we are grown-ups and it’s all connected with our hormone levels.

“I do focus a lot on the recovery part with my patients. I would say there is nearly always a way to recover and ride a skateboard but it depends on the level you were able to skate before.”

Would you say there is always a way to recover or are there injuries you should rather consider to stop skating?
A good rehabilitation leads to a better outcome of the injuries, this is important. I do focus a lot on the recovery part with my patients. I would say there is nearly always a way to recover and ride a skateboard but it depends on the level you were able to skate before. We’re talking about skateboarding, it’s our big love, so the return to being able to skate is always my goal.
I’m not the doctor that would say stop skating otherwise you will be “crippled in the future” as my doctor said to me when I was 14 years old. I always try to find a way to be motivating. I believe to be able to skate/surf perhaps with 70. Not like I am able today but defintely somehow.

That’s definitely good to hear you would say there is (almost) always a way back.
One thing I was wondering about is the most people would agree jumping down stuff is pretty bad for your body. But sometimes when I see „Pretzel“ movements, these body-twisting tricks, I wonder how harmful these are, especially compared to jumping down stairs and gaps.
Yeah, you’re right. Dorking around has a special dynamic. You can twist your joints and break bones so easily. “Pretzel” movements have little hidden pitfalls as well. When landing big stuff you and your body are prepared to handle the impact and speed. Most of the injuries in life happen in unspectacular situations.

“Surgery is inevitable when there is the possibility to reach a nearly perfect outcome with a good longtime perspective. But of course surgery should always be the last option. I believe in mental strength and our physical convalescence.”

So you say there is always a way out. At what point do you think surgery is inevitable?
Surgery is inevitable when there is the possibility to reach a nearly perfect outcome with a good longtime perspective. For example unstable knee joint after ACL rupture. I follow pros like Paul Rodriguez and their comebacks with high interest. Also, complex meniscal injuries lead when left untreated to arthrosis/destruction of the knee joint. As a knee (and shoulder) specialist I always fight against cartilage destruction/arthrosis of joints which is in my opinion our biggest enemy.
Concerning back pain, there is only a need for operation when it comes to paralysis. Dislocate bone fractures need to be operated, more seldom muscle ruptures. But of cause surgery should always be the last option. I believe in mental strength and our physical convalescence.

How do you warm-up before skating?
Cycling to (and back) from the spot is the best for warming up muscles and getting nutrition for the cartilage of the joints. Just like football stars doing aqua cycling afterward, which is even better.
I do flex a bit yoga-style to get my back warmed up and warmups for hips and ankles like Kyle Brown also shows in his videos.
Ann shoulder circuits to be ready to bail.
Then cruising around and doing easy basics followed by a Game of S.K.A.T.E.

So let’s get this straight once and for all. Stretching before or after the session?
After the session is a must to be able to skate the next session. Before means to me doing some stretches while getting warm!

So more dynamic stretching?
In the beginning, yes.

Got it! Anything else you’d like to share?
Skateboarding taught me so much about life: try and error and that everything in life is possible by doing small steps. Fighting, dealing with pain and failure. Focussing, repeating, dreaming, social connectivity, the feeling of success, creativity, architecture, music.
I am thankful for every session, skateboarding in general and lastly for the opportunity to talk with you guys about this.

For sure! Anytime. Let’s catch up, hopefully not because of an injury!