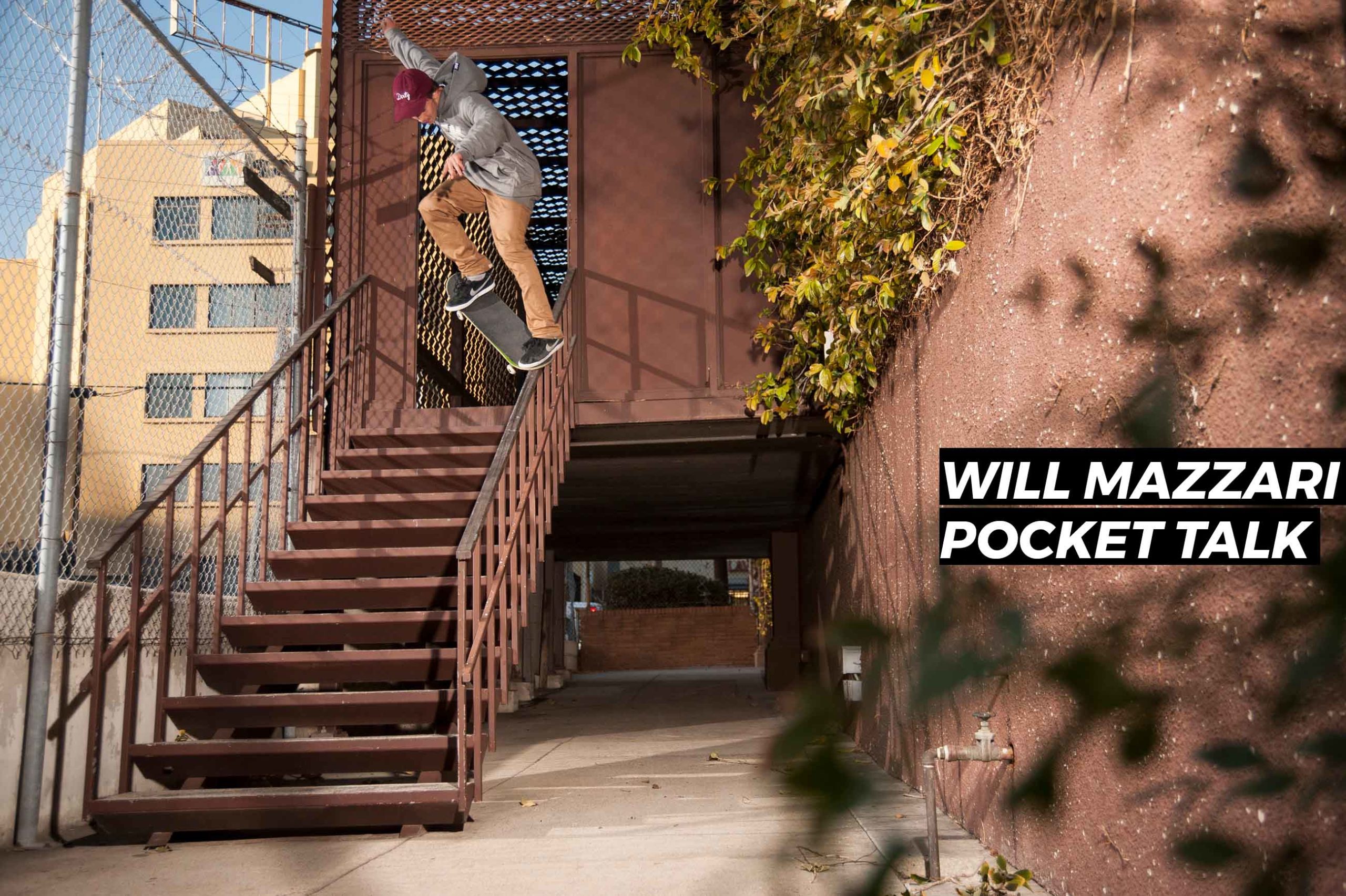 Will Mazzari just dropped a proper part for DGK. When we say proper, we mean proper. Very well rounded and a good bag of tricks. We got the chance to have a quick chat with him to see what’s up at the moment. We can’t go on trips right now, but we at least took some trips down memory lane with him, following the road he paved for himself to get on DGK.

Will, what’s up?
Just got home from working about to go skate for a bit what about you?
Still working but similar plans for the day.

Congrats on your first official DGK part! Coming from the North-East of the US, how did you establish a relationship with DGK?
About 5 years ago the old TM Brad Dosado DMd me on Instagram asking if I was interested in getting some boards and of course I was down. Coincidentally Brad Wade and Dane were making a trip to NYC a few months after that and said I should pull up. So I made the journey down there to meet those dudes and skate with them for the day. Ended up getting a couple clips in the Quarter Snacks edit.

How did all this Covid-19 madness affect you?
Well, I was living out in Long Beach but because of everything happening my mom had to close down her thrift store.

So you guys needed to drive back to New Hampshire?
Yeah, it was pretty mellow though. Me and a couple homies packed up the cars and drove back in a few days.

Do you know when you’re going to be able to move back to Cali again?
With how everything’s looking right now not anytime soon.

“The whole trip took us about a month. We camped the whole way staying in national parks, homies yards, or just skate parks.”

I heard you brought a special Cali souvenir to New Hampshire?
Yup a classic schoolyard bench.

That’s amazing! I vividly remember the first time skating one of those. When was your first skate trip to California?
The first time I drove across the country to California was so much fun. Me and 4 other homies all packed in a van and started driving. The whole trip took us about a month we started up in Maine and made our way through New York, Chicago, Denver, Seattle, Portland, SF and down to Long Beach. We camped the whole way staying in national parks, homies yards, or just skate parks.

That sounds like the definition of a good time!
Legend has it you almost stepped on a rattlesnake on that road trip – what was going on there?
We were out in South Dakota camping at the Badlands National Park and the homie Liam said he found this amazing dried out salt river we had to check out. So me and the other homies started jogging down to the river in flip flops and as we were getting close I heard a crazy noise and a foot in front of us was a rattlesnake going crazy about to attack.

Scary! Glad the trip went successfully after that.
How did you like Cali?
California is amazing for skating the weathers always perfect and there’s a insane amount of parks and spots

“We where shutting down the whole street to have a block party in the neighborhood Stevie grew up.”

Being on a team with Stevie Williams must feel pretty surreal. How was the experience of joining Stevie and the guys on that cross country trip from LA to Philly and back? Can you tell us your 3 favorite moments/stories from that trip?
That was a once in a lifetime experience for sure! The first thing would be all new completes we were able to give out across the country to lower-income youth. Second would probably be driving overnight from Philadelphia to Chicago and upon arrival at 10 am we pulled up to a pier and hopped on a yacht and cruised out into Lake Michigan for a few hours. Third would be shutting down the whole street to have a block party in the neighborhood Stevie grew up. Those were great times!

Wow, life hammers!
What do you do when you’re not skating?
Play video games, chill with the homies, look on google maps for spots.

What’s the first thing you are going to do when you’re back in Cali?
If JKWON is good then that’s it but if not probably Cherry Park.

Alright, thank you! Really enjoyed watching your part – can’t wait for the next one!