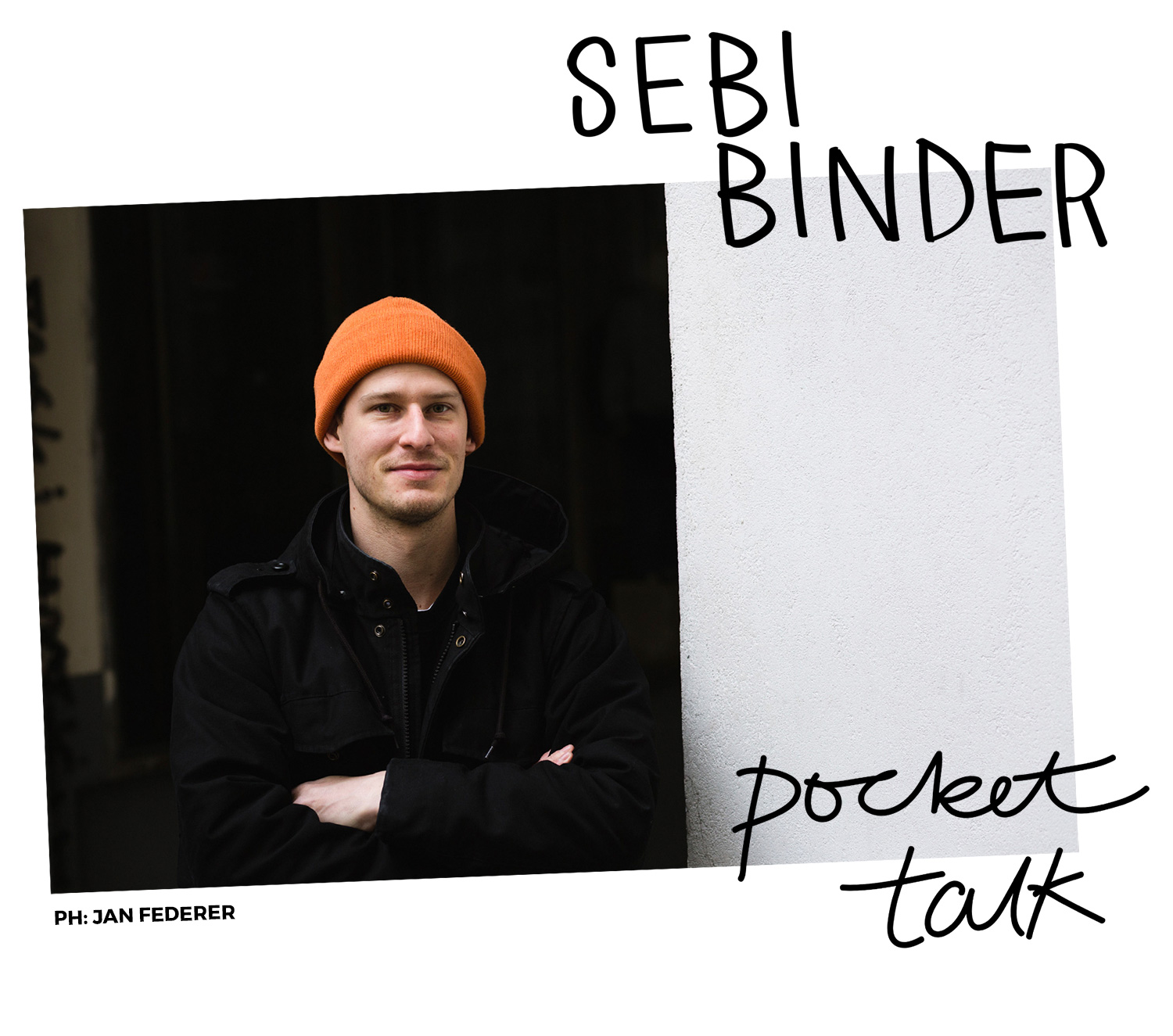 Sebi’s good! Not only good in terms of his abilities on a skateboard, but even more as a person! If you know him, you like him. And if you don’t know him yet, maybe this will make it feel a bit more like you would.

Sebi! – How are you? What are you up to right now?
Good, thank you! I am at home now. Three days ago I became a dad for the second time, so it’s all about it. Changing diapers, carrying around the little one or taking care of my big one

Does Vienna have an indoor park? Where do you skate during the winter season??
There is an indoor park in Vienna, but it is far too small for the scene. So it is usually too crowded and way too loud to have a relaxed session. Last winter I went there only one evening a week and I spent a long weekend in Naples. Otherwise, I do not go skating during winter season. And right now, I am at home with the family and before that my ankle was hurt. But in the meantime, even in the summer, I do not always have to go skating. I used to skate every day because that was the only thing I was doing at the time. And most of the time the legs were not quite fit or we went to the same spot for the tenth time. And every now and then, there was a good day. These days I only skate once, sometimes twice a week, because I want to dedicate myself more to my family and my work. But as good as every session is ‚leiwand’ (Austrian expression for something that is really good). I feel better on my board than ever before and am now halfway satisfied with my footage and my photos, haha!

Who do you skate with right now?
I do not skate much, but when I do it’s always different people I skate with. Actually, it just depends on who has time. Mostly with Jan Federer (who does the ABD Mag), Philipp Schuster (who also just turned daddy), Luci Jankoschek (who does the ‘Turtle Productions videos’) and Noyan, Ben Zibuschka or Martin Fehrer and the ‘Confus Partie’. There are also some “crews” in Vienna whose sessions I like to join – depending on who is out in the streets at that time.

How would you describe Vienna’s skate scene?
Big and productive, but overlooked internationally. There are some crews and a lot of people who make videos on a regular basis, so 2-3 videos come out every year. In addition, Jan Federer has been doing the ABD Mag for some time, which is truly an asset after years without a single Austrian skate mag. There are also a few small brands, a handful of skate parks (and with the Spoff Crew the best guys to build them!), lots of spots and lots of good skaters. And the best ground on which you can push through the city from spot to spot all day. But I think outside of Vienna you don’t hear much about all that. It’s all about Berlin, Paris, London, Copenhagen or Barcelona. But maybe that’s just fine like that.

Did you always live in Vienna?
No, just before the Matura (high school graduation) I moved to Vienna. But that’s 13 years ago.

Again, congrats on your second child!
Thank you! : ) I cannot even believe that he is here now!

Do you have a lot of friends who are parents, too?
Pretty much by now. There were only a few when Mavie (Sebi’s daughter) was born three years ago, but since then there’s been a real baby boom among the Viennese skaters.

Is there big difference between having one or two kids?
I honestly do not know that yet – Levi is just 3 days old. I suppose there will be more to organize in order to balance family, skating and work. But supposedly two children are not twice, but ten times the work. So I’m curious and hope for the best, haha!

What has changed for you since becoming a father?
Everything, but fortunately so far only for the better. For the most part, the values ​​and priorities have shifted. A lot of things are just not as important anymore. In terms of skating, of course, a lot has changed. I already mentioned it – there is more organization behind it and I just skate less often. Everything will be different again next summer. Maybe I’ll go skating in the morning when the big one is in kindergarten. Then I can pick her up sweaty and dirty with the skateboard and have fun seeing the other parents’ looks, haha!

Expectations vs. Reality? What was how you imagened and what was totally unexpected?
Before, I could not imagine what life would be like with children. I do not think that you can prepare for it. One day it’s just like that.

Would you like them to eventually start skateboarding?
Basically, of course. Simply because I have a connection to it and skateboarding taught and gave me so much. Besides, being a skater is not just about skateboarding, but goes along with so many other things. Some people take pictures or film, others paint, do woodwork or maybe build concrete parks. And all just for the sake of it. These are certainly all fulfilling, creative activities. I think I really want to give them that, to find something that gives them that satisfaction. Of course, if it’s really skating then I’m happy about it.

“I can pick her up sweaty and dirty with the skateboard and have fun seeing the other parents’ looks, haha!”

What are you doing for work?
Mainly I produce videos, mostly as a one-man band or as a DOP behind the camera. Depending on the job, it can go from the idea and conception to the shooting, editing and post production. Usually, these are smaller projects for advertising agencies or marketing departments. Sometimes, I am only booked as a cameraman, then I also do stop-motion animations, cinemagraphs for Instagram and in between I do smaller photo jobs. This is a rather heterogeneous task field and always a little difficult to get to the point, when someone asks me what I’m working for. But in the end, it’s always about visualizing an idea or story.

How do you manage to find new jobs?
Funnily enough, most of the jobs find me. I have been doing this for almost ten years, first alongside my studies and for a few years now as a sole proprietor, and over time I have built up a small network. It was created by the work, because I always meet new people and often potential customers. Some customers are simply friends and acquaintances who now work in agencies. I also have some colleagues who pass on jobs to me when they are already booked and cannot take them. My goal for the next year is also to be more active in looking for jobs that interest me.

Did skateboarding somehow inspire you to take the creative route?
As a skateboarder you get in touch with photography and videos, but also art and music. My father took a lot of pictures in my childhood, but my first camera was a video camera to film my friends skating. Why I have taken this path now, I can’t really tell. And also if I would do this job without skateboarding in my life. In any case, I have dealt with skate videos from the beginning, especially with editing. My first skate video on VHS was “Real to Reel”. This is still one of the best videos for me, also because the intro and the cutscenes are cool, but at the same time they are not too much. (And also because of Nate Jones, Huf, Mark Gonzales, Cairo Foster and Dennis Busenitz, but that was not really the question : )

Did you ever consider looking for a job inside the skate industry?
Yes, every day. haha But no, not really seriously. Actually, I have a really great job, which allows me to spend a lot of time with my family and to have free time for skating and hobbies. I also want to stay in Vienna and there is hardly any skate industry here. Of course there are skate shops – I also worked Saturdays at STIL Laden Vienna for a few years, but otherwise most of it is in Germany. So in the end, I prefer to do what I am doing right now and when I feel like it I am doing graphics for STIL Laden, photos for the ABD Mag or whatever else comes to mind that is fun. Who knows, maybe there will be a job in skateboarding that offers that, too.

Just like that, it’s 2018 already! Any new years resolutions?
Of course to be there for my family! Being productive and thankful for the support I get.

-Sebi would like to give out huge thanks to Marlies and the whole family, Pauli and Chrisi from Stil-Laden, Johannes & Philipp and everyone at Mosaic / Huf, Jan and John at Sprouters / The Killing Floor, Evy, Bram and Joseph at Carhartt WIP, Henning at 247 / Ace, Philipp and Jan for the photos and again you and Burny for giving me this opportunity!