Trent grew up with two brothers who both skate. Throughout the years, they have all been killing it on their boards, constantly pushing themselves and each other. Maybe this determination runs in the family. In April 2016, he got introduced to the Primitive family. His status as an am on the team did not last long: with his smooth style and undeniable skills it was just a matter of time until the youngest of the McClung brothers turned pro.

Since when did you know that you were going to turn pro?
I´ve known it for a while. Primitive wants their dudes to know what’s going on and make sure that they are hyped on everything.

How long have you been filming for this part in total?
I think for a little bit over a year.

How did the idea of a Euro trip come up?
I was planning on going back to Barcelona to try and finish up my part, but I was there a few months before with Primitive, filming for the Pendleton Zoo edit. That’s why we decided to go somewhere I haven’t been to and I had homies in Stuttgart and Zurich to show us around.

Which destination did you like best?
I really liked Zurich. It’s super clean, everyone’s mellow and there are so many good spots. I feel like we didn’t really get kicked out of anywhere either! I already want to go back!

Did you meet any international Primitive riders?
I met up with Marek Zaprazny in Barcelona, Patrick Zentgraf and Farid Ulrich in Stuttgart. 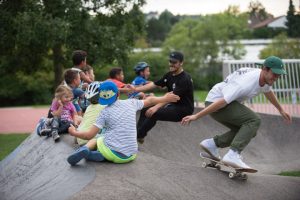 It seemed like this has been a trip to finish up your pro part. How come that both of your brothers joined?
Trevor was already in Europe on vacation, and Taylor was planning on going to Barcelona already, so it made sense to have them come along.

The McClung Brothers play Game of SKATE, who wins?
It’s different every time. Just who ever is having a good day I guess, haha! It’s actually been a while since we have played a game.

What’s up next?
Keep filming and traveling as much I can. Stay productive!