With the majority of the skateboard industry located in Southern California, it is without a doubt the place to be if you want to pursue a career in skateboarding. No wonder that among all the miles on Denny’s frequent flyer program, many took him to the City of Angels.
Don’t get us wrong. Denny is a well-travelled man. He’s been all around the world and has a passion to discover new places.
Yet, he didn’t think twice to join Pocket: Los Angeles.
What’s the matter with that city?

Denny, let’s talk Los Angeles.
You’ve been to LA multiple times already, while most of our Pocket LA squad is pretty new to the City of Angels. Let’s face it: you’re our LA veteran!
What still stokes you about this city? LA veteran, haha. Not really but by now I know this city quite well. I’m pretty stoked that I’ve met so many good people from Cali during my travels and my visits to LA over the years. It’s nice to know that there are friends on the other side of the globe who want to go on a session or just kick it. But honestly, most fun to skate are those bump spots that just emerge naturally all over the city. A good sidewalk bump over a hydrant or whatever is one of the best things LA has to offer, haha.

“There was no police or law that could have helped us out at that moment. Just gang shit.”

What is different if you’d compare your first LA trip to the most recent visits?
Well, back then I thought it would just be like in the videos. So the expectations of doing a Cali trip were pretty high!
I think my first trip to LA was in 2009 with my old board sponsor Titus. The crew was tight and Instagram or endless data volume wasn’t a thing back then. So we were counting on our local connection, which would just show up every now and then. If you don’t have a spot map and don’t know where to skate in LA you’ll spend hours of driving and searching for some crappy ledges in Santa Monica where you’ll get kicked out immediately. All this hassle is not necessary anymore today. If there’s a place where navigation systems are really needed, then it’s LA.
Other than that, LA has stayed the same, more or less. The people still love In-N-Out and Venice never changed. Oh, but there’s way more organic super food freaks nowadays. Same like in Germany, just on a whole other level. I think turmeric ginger shots for 6 dollars weren’t a thing in 2009. And, of course, Trump wasn’t president.

I imagine going to LA so frequently can lead to some hassles with the Customs and Border Protection.
What are your experiences with that?
Everybody knows that the CBP can give you a hard time sometimes. Even if you have nothing to hide, an CBP officer can make you sweat with his enormous authority. I’ve never had a problem with entering the US until my last visit. When I tried to refresh my ESTA Visum last year, it got denied for the first time because I had visited Iran in 2013, so I was forced to apply for a B1/B2 Visum, which I got after a few visa runs. Well, the US ambassador didn’t give me the visa on my first time applying because he had found a tiny open ripped stitch. He told me to get a new passport first before he could give me a visa.
To be honest, I think it’s all chicanery! They want to give you a hard time for some bullshit, like they want to make you feel it’s a privilege to get this visa. My passport was absolutely fine! I’ve never heard of something like that before.
Also, the more you travel to the US, the more curious they get and the they treat you like a gangster at the border, as if you were doing illegal work or some shit. I had it all!

How many miles did you get down in last three months of LA?
Too many. I think we drove 3000 miles in three weeks on this trip!? We were definitely doing some shit to the environment. Fuck it, the climate change is a myth, as Trump said, haha. 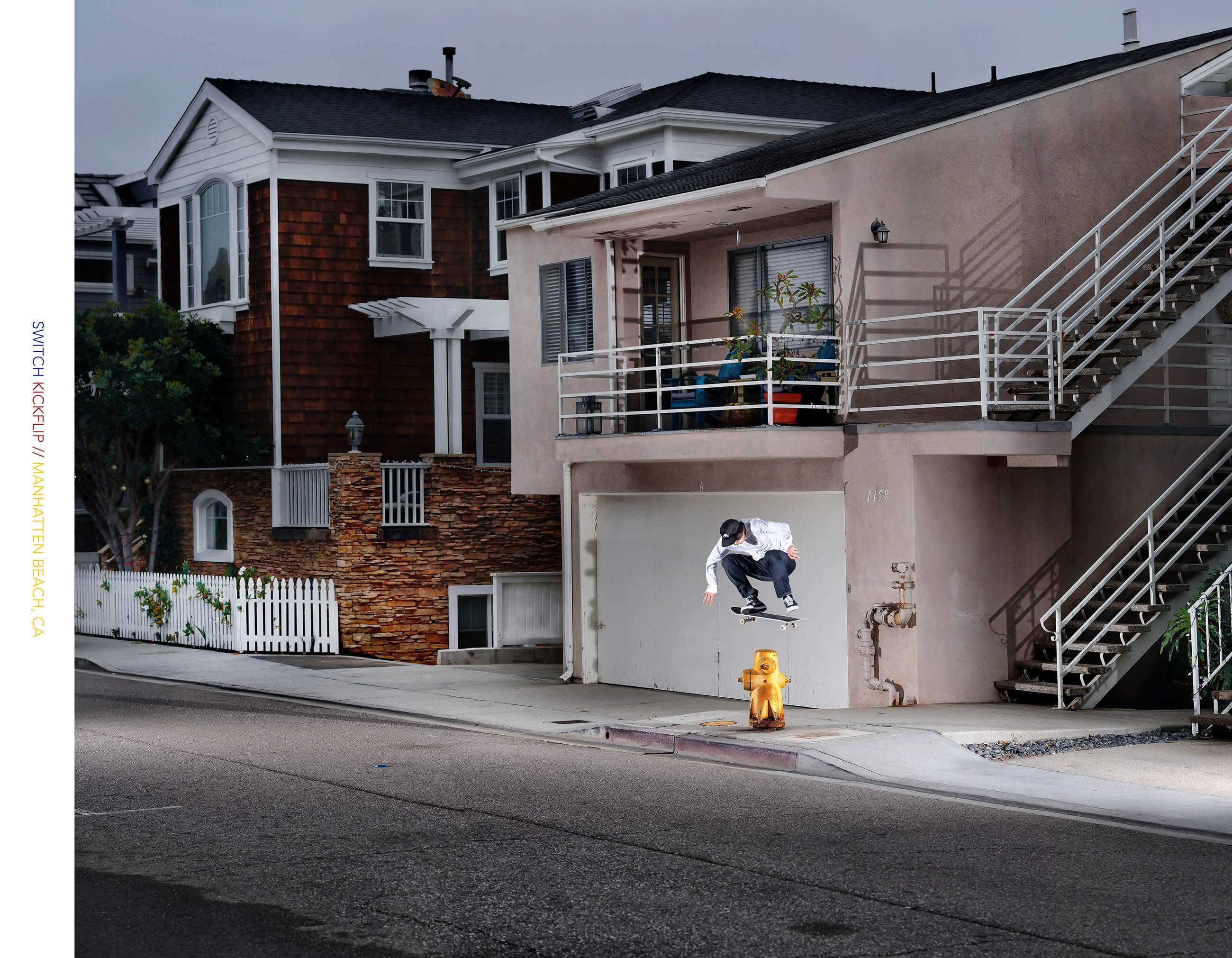 Living in Berlin you are used to having parties available right in front of your door 24/7. How do you keep up with your need to go out when in Los Angeles?
That’s something I like about LA! You don’t really wake up too often with a crazy hangover. In general, my routine with skating works better over there. I still wouldn’t change it though, if I could, haha. Sunsets at 10pm are the best during Berlin’s summer. Winter days are not so cool.

When it comes to food, LA has it all. You can go good or evil. Fast food or super foods. What do you prefer?
Healthy food for the most part. Only shitty, greasy burgers for good tricks or when Kai Hillebrand is in town.

The interview opener implies that you also like to have a stack of pancakes from time to time. Did you actually eat all of those?
I always finish my plate. 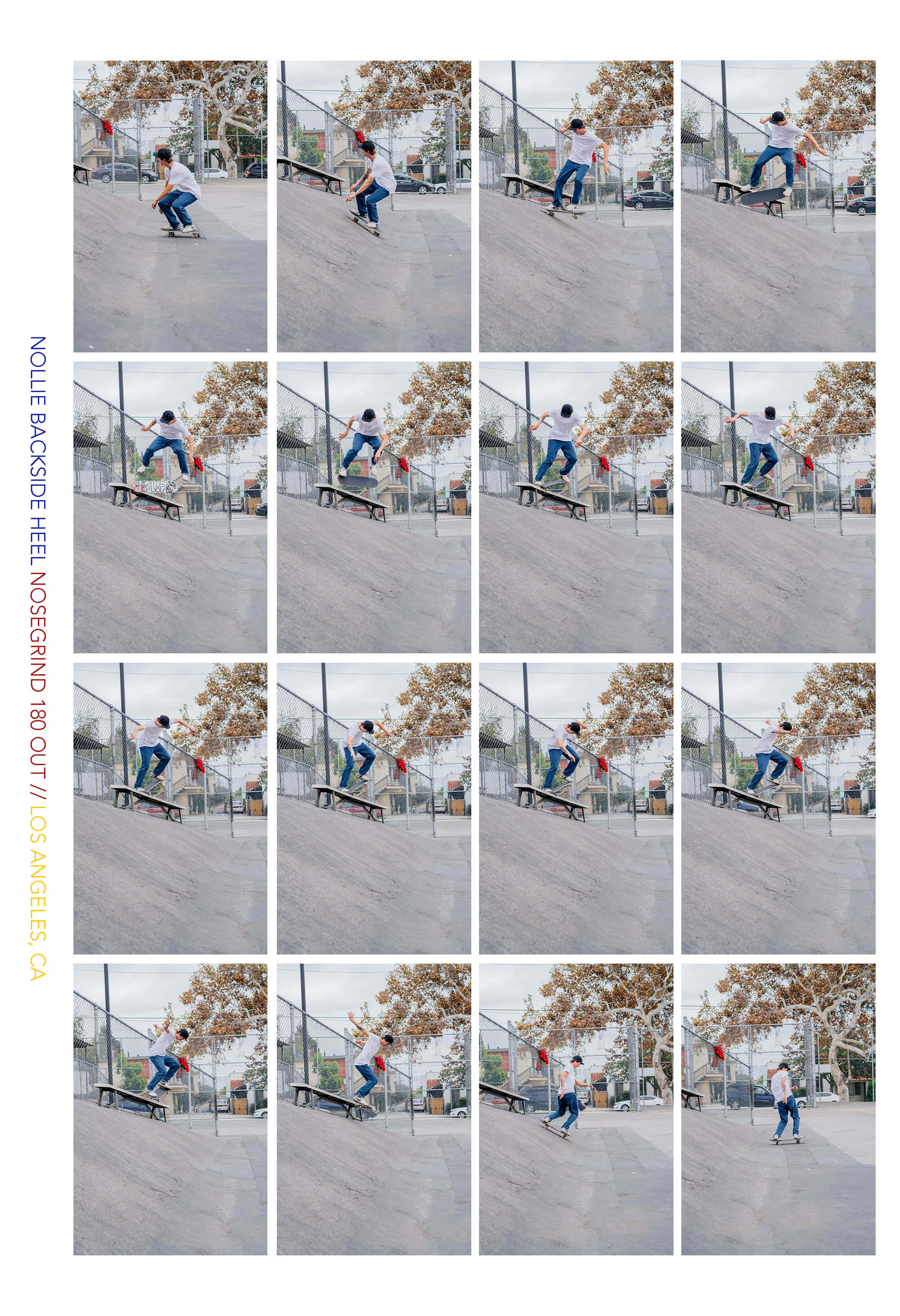 The bump over fire hydrant you switch flipped looks as good as it gets. I know there’s a crazy story about how you guys found this spot.
After searching for it for weeks and asking dozens of people, the homie Justin Crawford said that the buildings in the background kinda looked like Manhattan beach. So my friend Burny, who was with me at the time, started looking around this area with google earth. We were about to give up, but in the second we were about to leave the house he found it with google earth. Being patient paid off. We had such a fun session that day.

Growing up in Central Europe we’re not really used to having no-go areas. So skating in LA, I don’t really think about the potential of encountering a sketchy situation too much. Even though you get lucky most of the time, a lot of sketchy stuff happens. How do you feel about this and have there been any situations you are lucky you got out of?
Usually skaters know where to hang out at what time. But sometimes you’re not even safe being in a car, haha. One time Burny was driving and we stopped at a traffic light in Inglewood. Somehow he managed it to crash into a van in front of us, with like no speed. He went so slow that there wasn’t even a single scratch. When the owner of the van came out to see what happened, he saw us (one half-Vietnamese/German and three German whitebreads) and smelled the fast cash. He tried to convince us to see our insurance papers and tried to bring us to his private garage to check the “damage”.
Even worse was this 40-year-old lady on the other lane yelling at us like a maniac: “Hey, what have these white *N-word* done to you!?” and “what are these damn white people doing here in this neighborhood at all!?”
This woman had her whole family in the back and more cars that belonged to her waiting behind. I’m sure if the owner of the van had been down he could have fucked us up big time at this moment. He just told the lady “It’s cool for now.”
After that, the people from behind were yelling “move b*tch!” to the woman, so she kept going and we somehow convinced the van driver to be chill. He was quiet and kind of mentally ill. I felt a little bit bad for him. Then he just stepped back into his car and we could bounce out. It felt pretty crazy.
There was no police or law that could have helped us out at that moment. Just gang shit. Even the woman was wearing a bandana.

Where do you usually stay when you’re in Los Angeles?
Depends, but usually with my Flip TM John Nicholson or my friend Andrea Dosuto. She takes photos and I’ve known her for a long time, back then we met in Barcelona. Sometimes I would rent an Airbnb or something.

Having almost the entire FLIP team living in and around LA, I bet you spend a lot of time with them. Who do you skate with the most?
Well, to be honest it’s hard to catch them sometimes because everyone is so busy with personal projects for different sponsors and stuff. Sure, every now and then we meet up for a sesh or a party. It Just depends on who’s in town.

Any chance we will see your name on a board any time soon?
Name on a board, huh. Why not!? It would be nice and a real honor. I’ll try my best! Let’s see, maybe I’ll get one when the next Pocket issue comes out, haha.