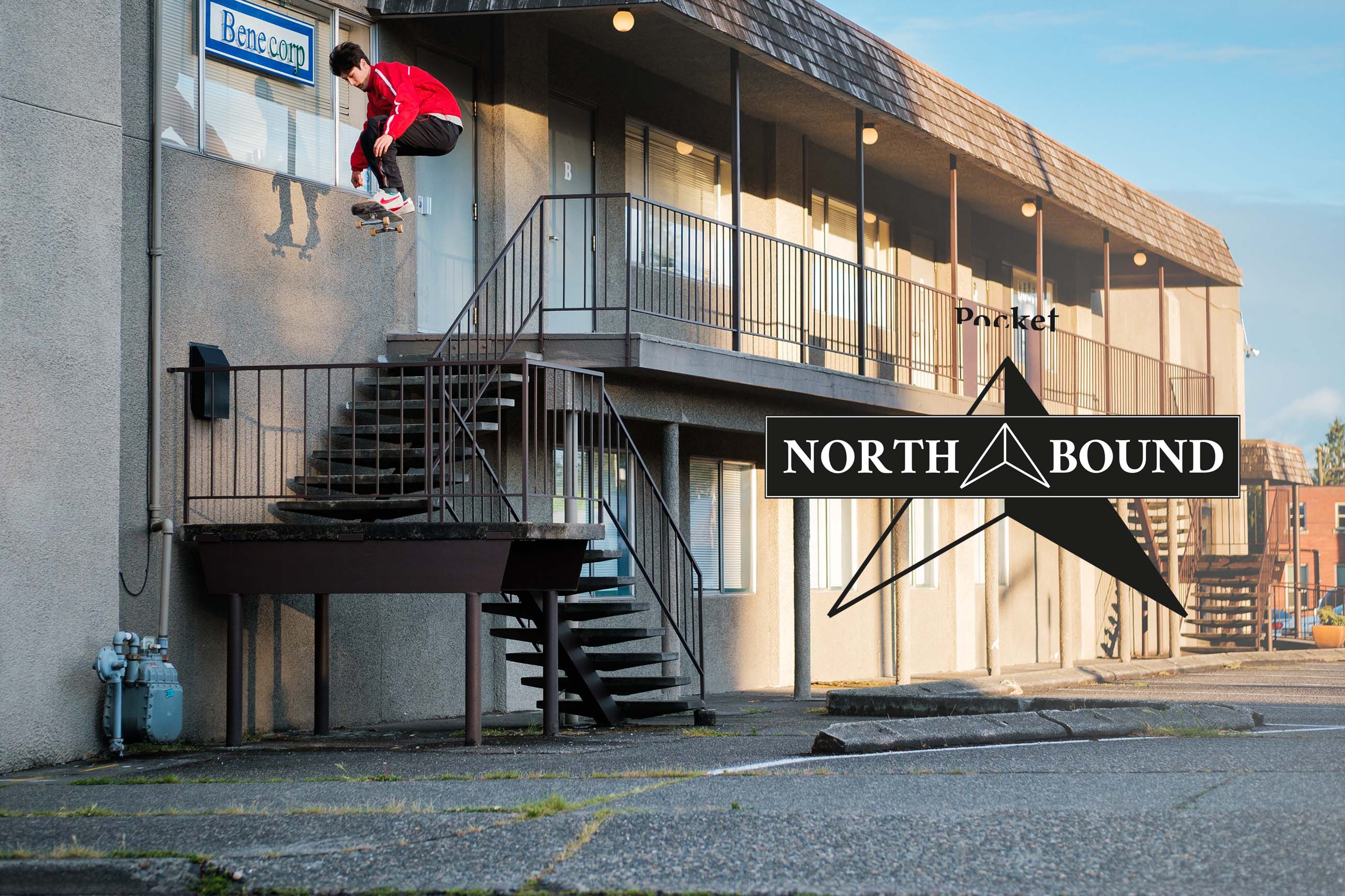 When we launched Pocket, we did a big trip to Los Angeles. Ever since this trip, the guys were hitting us up about doing something like this again. After more than one year it was finally time for a revival. We took the boys up north for our Northbound from Portland to Seattle.

A Video by Dennis Ludwig 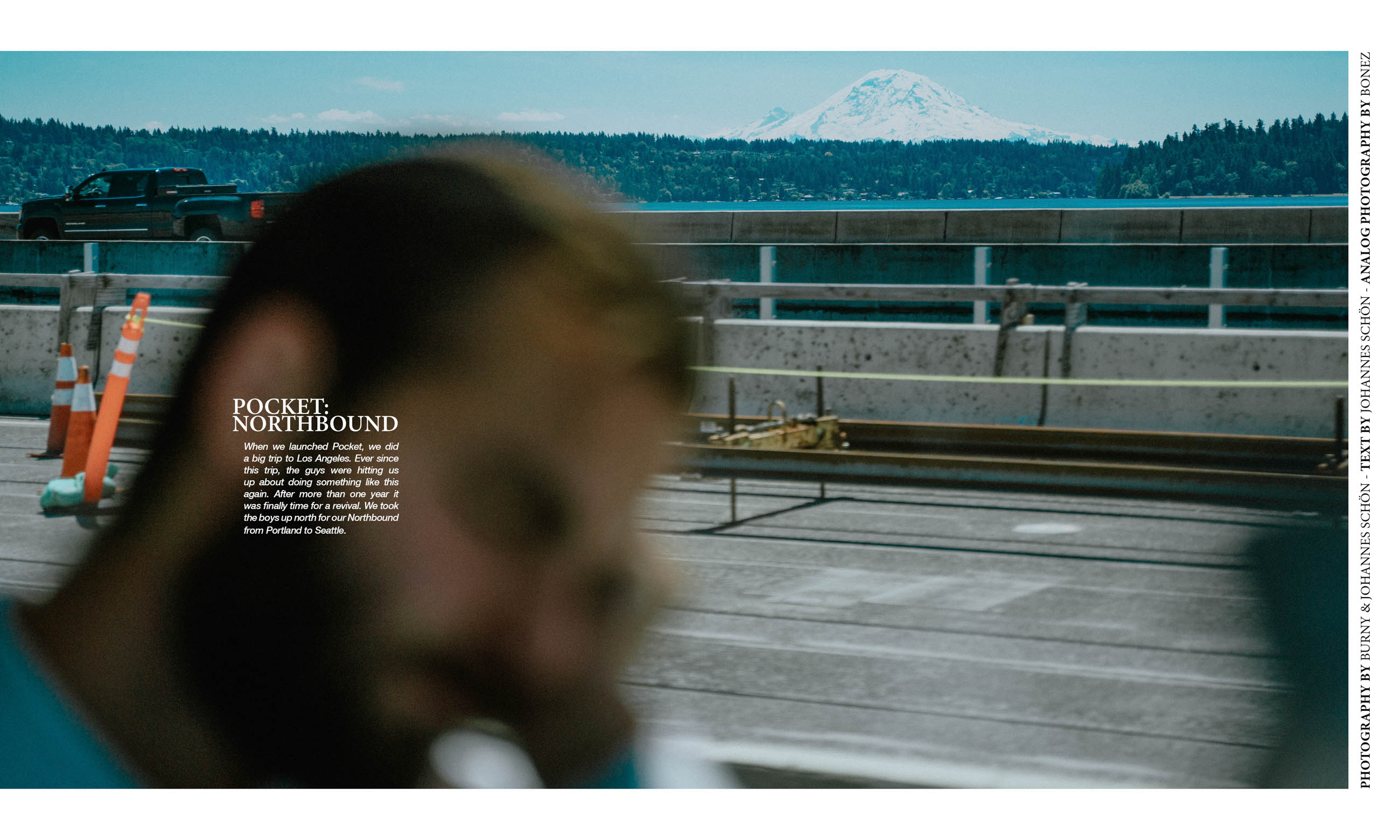 When we launched Pocket, we did a big trip to Los Angeles. Ever since this trip, the guys were hitting us up about doing something like this again. After more than one year it was finally time for a revival. We took the boys up north for our Northbound from Portland to Seattle. 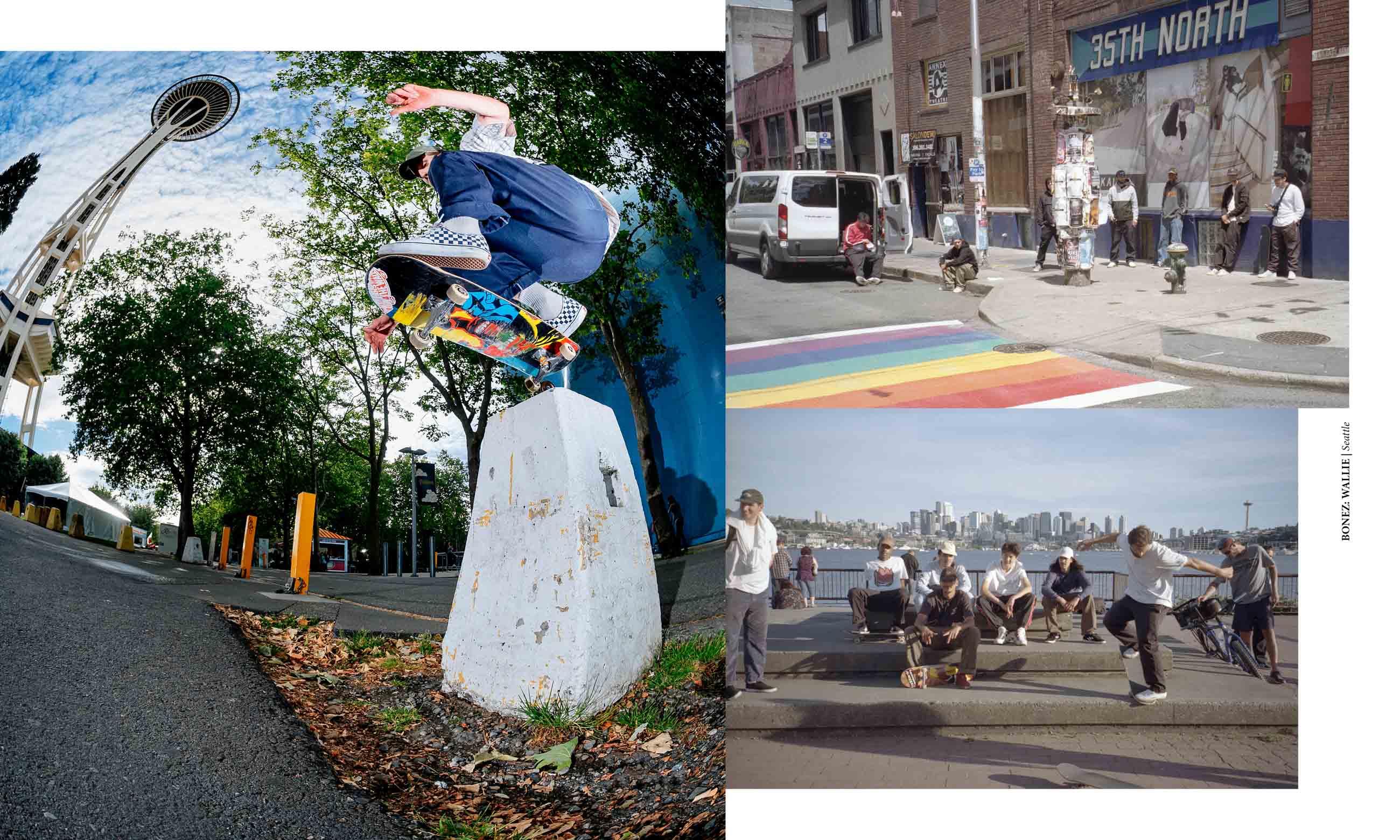 Just take a look at this city. You got the weird-looking Space Needle, beautiful brick buildings, rough parts, clean parts, and Mount Rainier poppin’ up now and then. All that and blue skies are more than you can ask for. 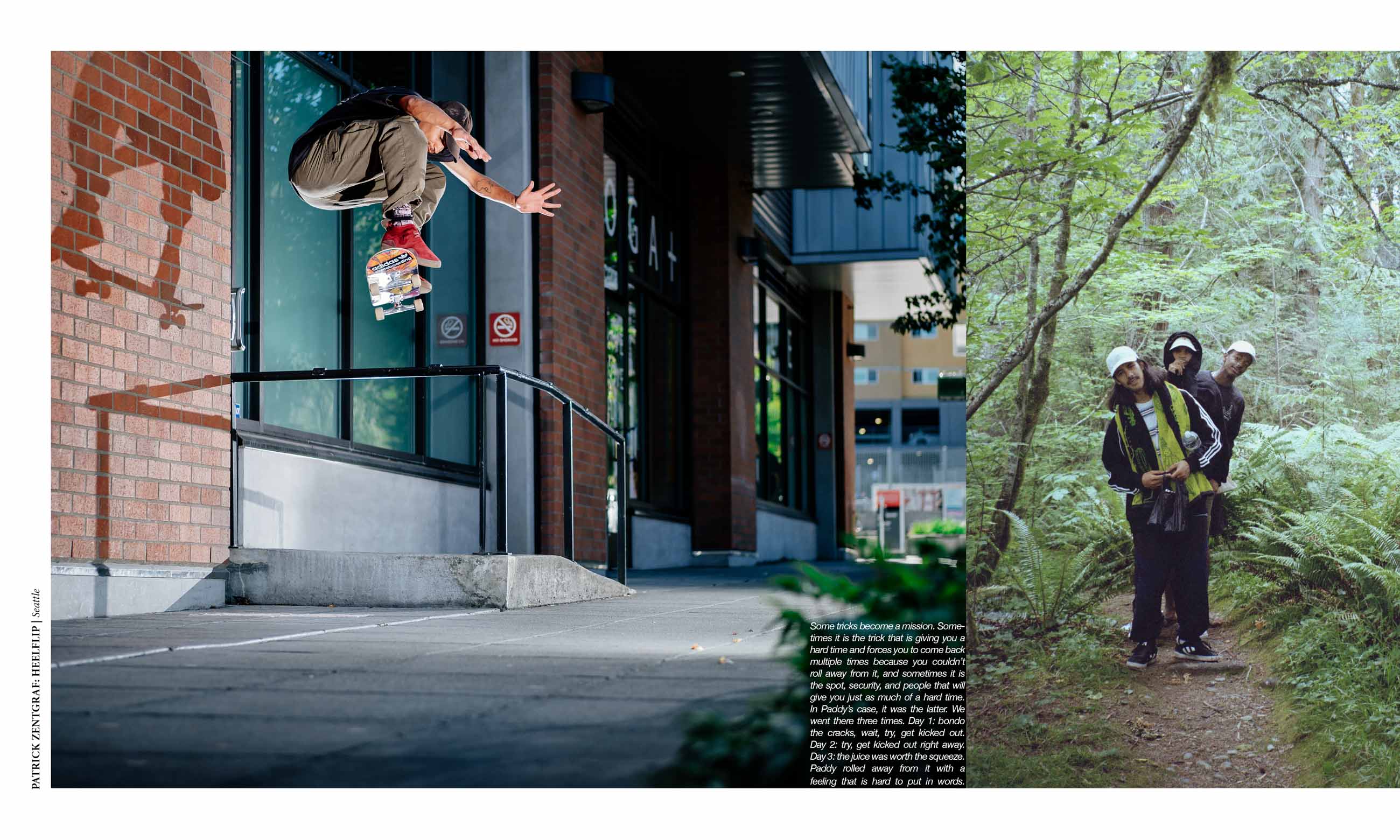 Some tricks become a mission. Sometimes it is the trick that is giving you a hard time and forces you to come back multiple times because you couldn’t roll away from it, and sometimes it is the spot, security, and people that will give you just as much of a hard time. In Paddy’s case, it was the ladder. We went there three times. Day 1: bondo the cracks, wait, try, get kicked out. Day 2: try, get kicked out right away. Day 3: the juice was worth the squeeze. Paddy rolled away from it with a feeling that is hard to put in words. 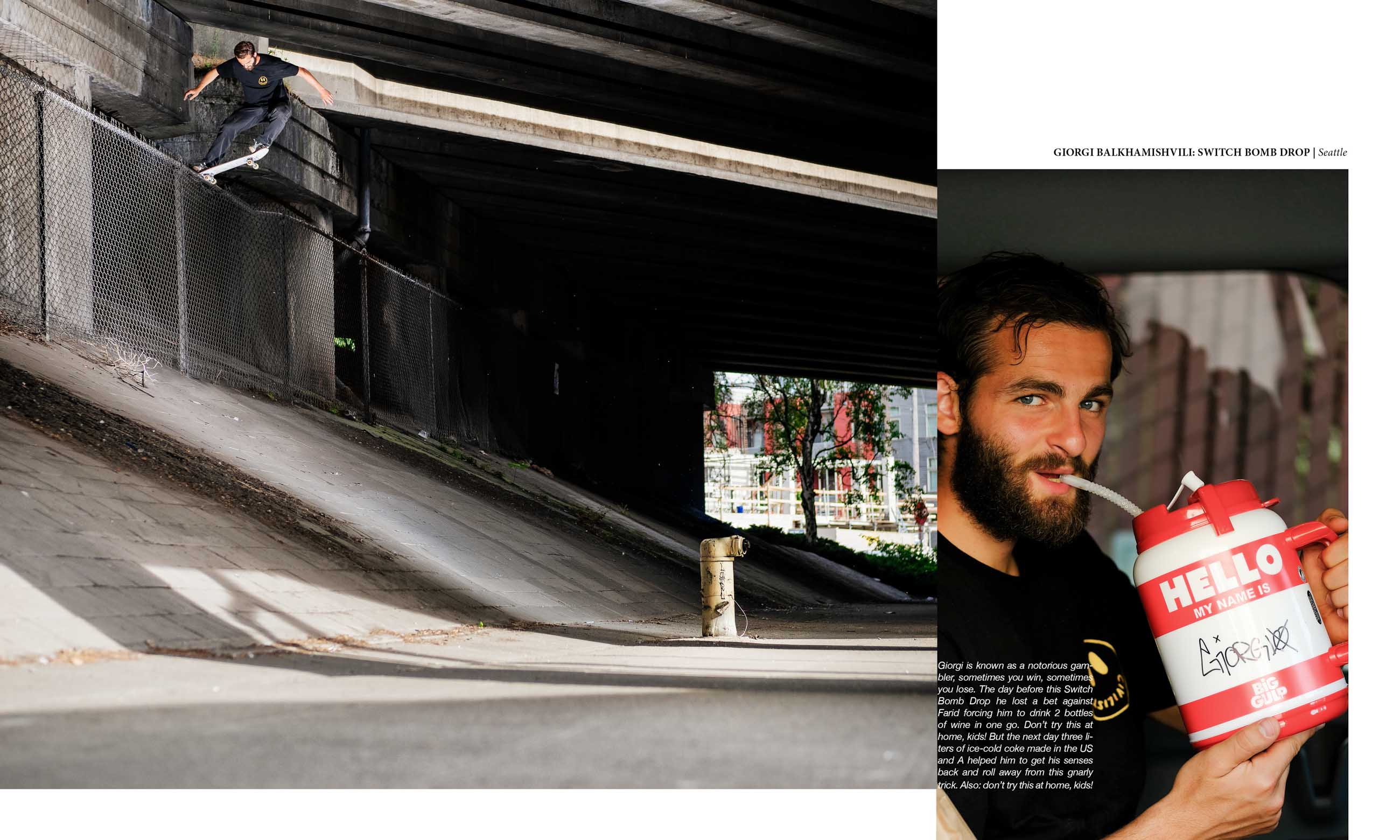 Giorgi is known as a notorious gambler, sometimes you win, sometimes you lose. The day before this Switch Bomp Drop he lost a bet against Farid forcing him to drink 2 bottles of wine in one go. Don’t try this at home, kids! But the next day three liters of ice-cold coke made in the US and A helped him to get his senses back and roll away from this gnarly trick. Also: don’t try this at home, kids! 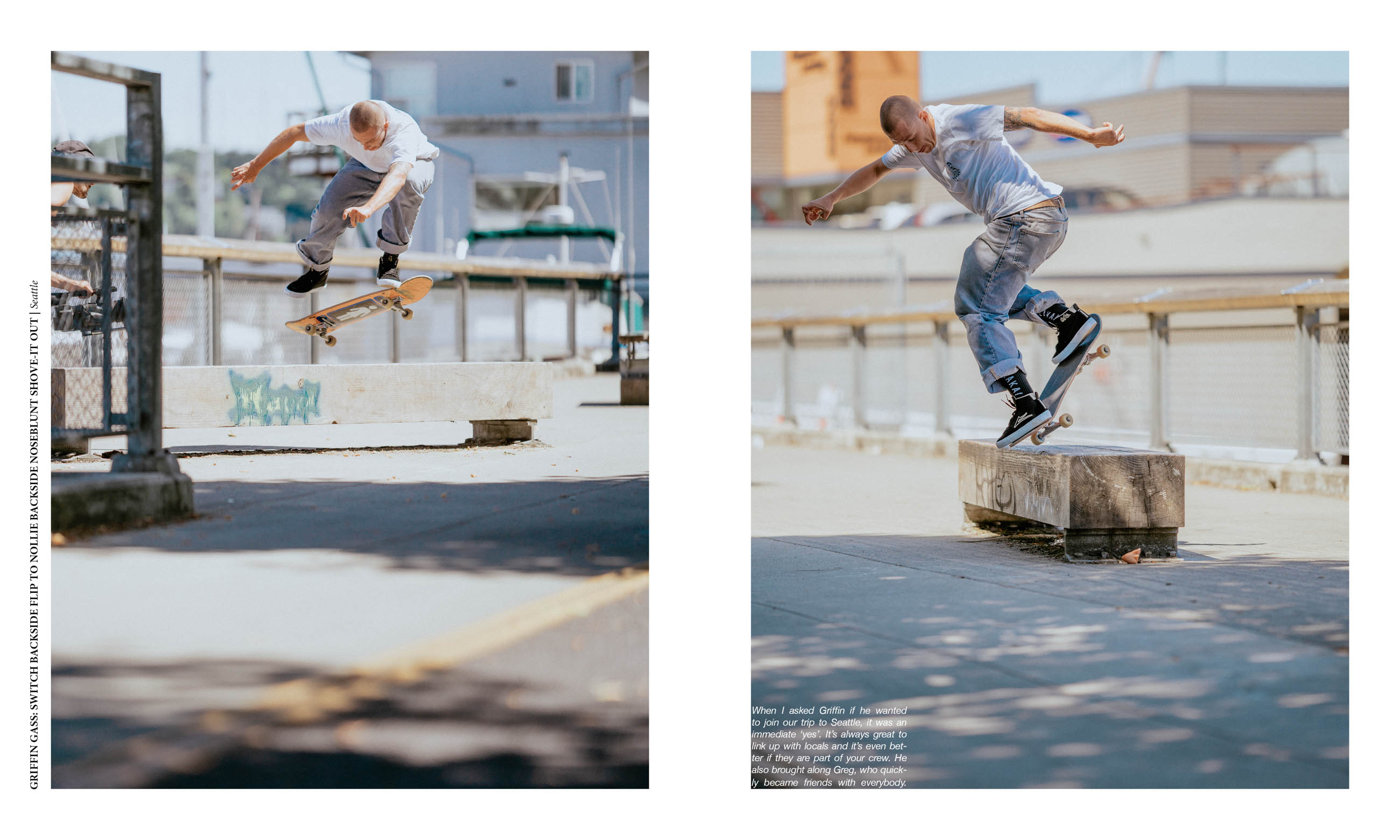 When I asked Griffin if he wanted to join our trip to Seattle, it was an immediate ‘yes’. It’s always great to link up with locals and it’s even better if they are part of your crew. He also brought along Greg, who quickly became friends with everybody. 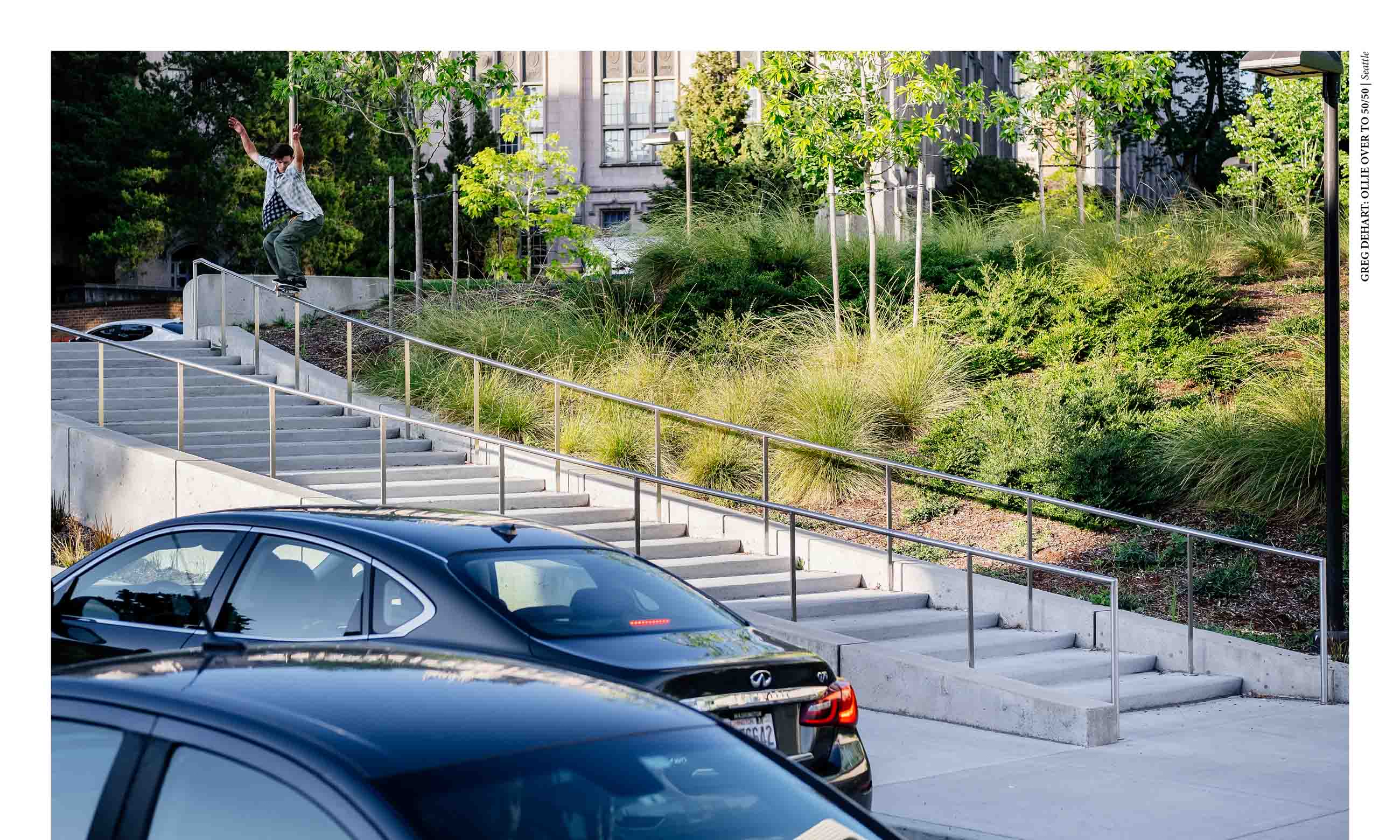 Griffin brought Greg on the trip and everyone quickly became friends. We were stoked on his skating and this 50/50 just shows how good he is. 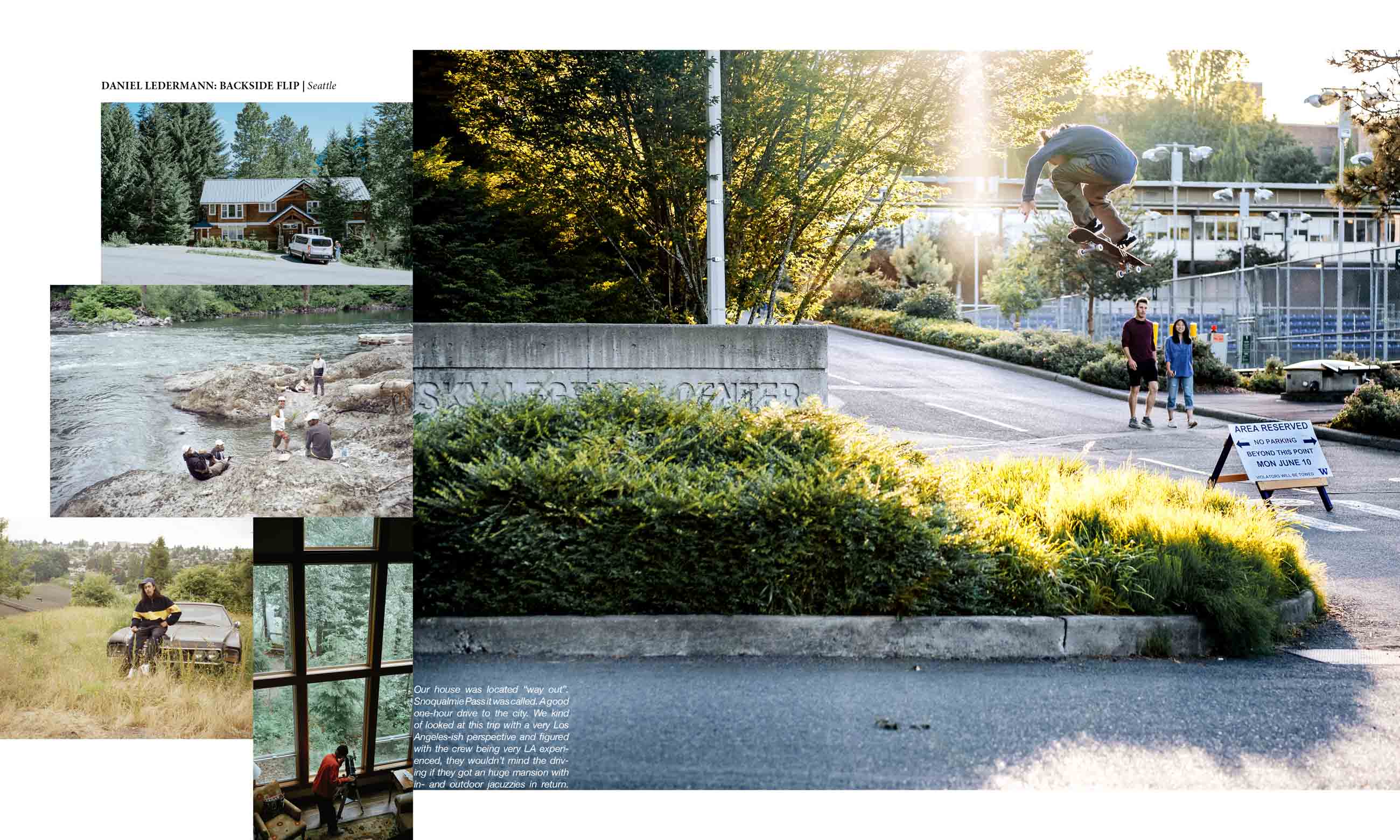 Our house was located “way out”. Snoqualmie Pass it was called. A good one-hour drive to the city. We kind of looked at this trip with a very Los Angeles-ish perspective and figured with the crew being very LA experienced, they wouldn’t mind the driving if they got an huge mansion with in- and outdoor jacuzzies in return. 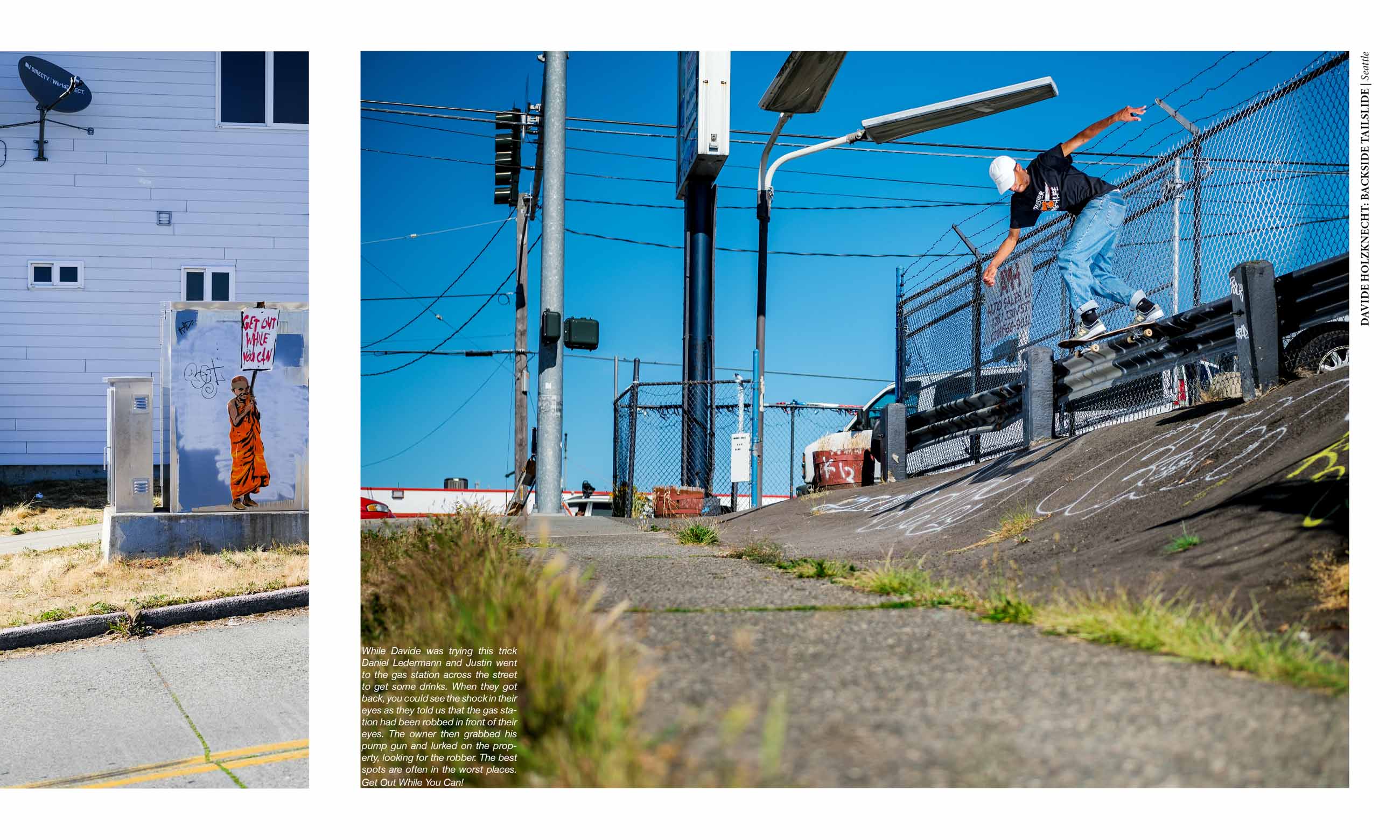 While Davide was trying this trick Daniel Ledermann and Justin went to the gas station across the street to get some drinks. When they got back, you could see the shock in their eyes as they told us that the gas station had been robbed in front of their eyes. The owner then grabbed his pump gun and lurked on the property, looking for the robber. The best spots are often in the worst places.
Get Out While You Can! 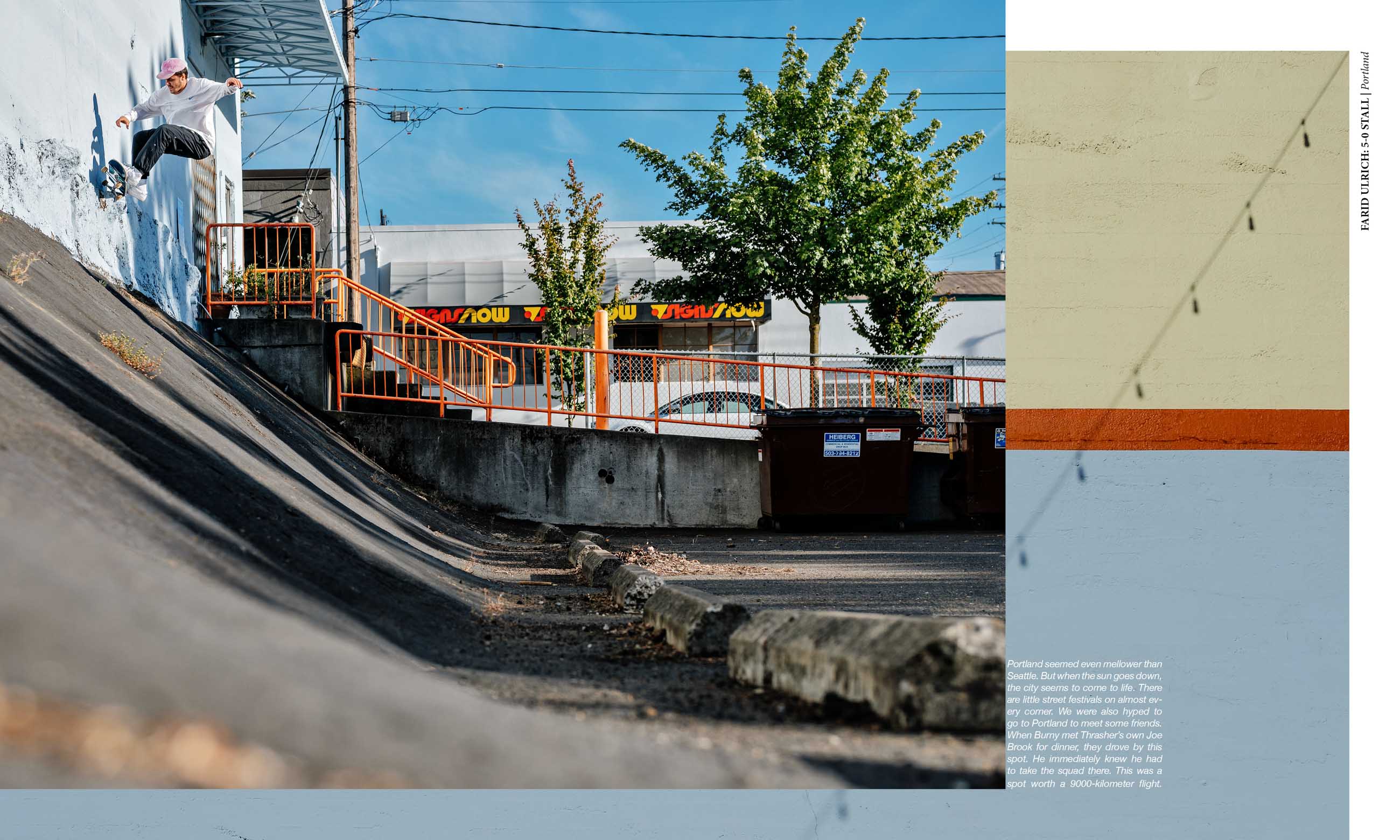 Portland seemed even mellower than Seattle. But when the sun goes down, the city seems to come to life. There are little street festivals on almost every corner. We were also hyped to go to Portland to meet some friends. When Burny met Thrasher’s own Joe Brook for dinner, they drove by this spot. He immediately knew he had to take the squad there. This was a spot worth a 9000-kilometer flight. 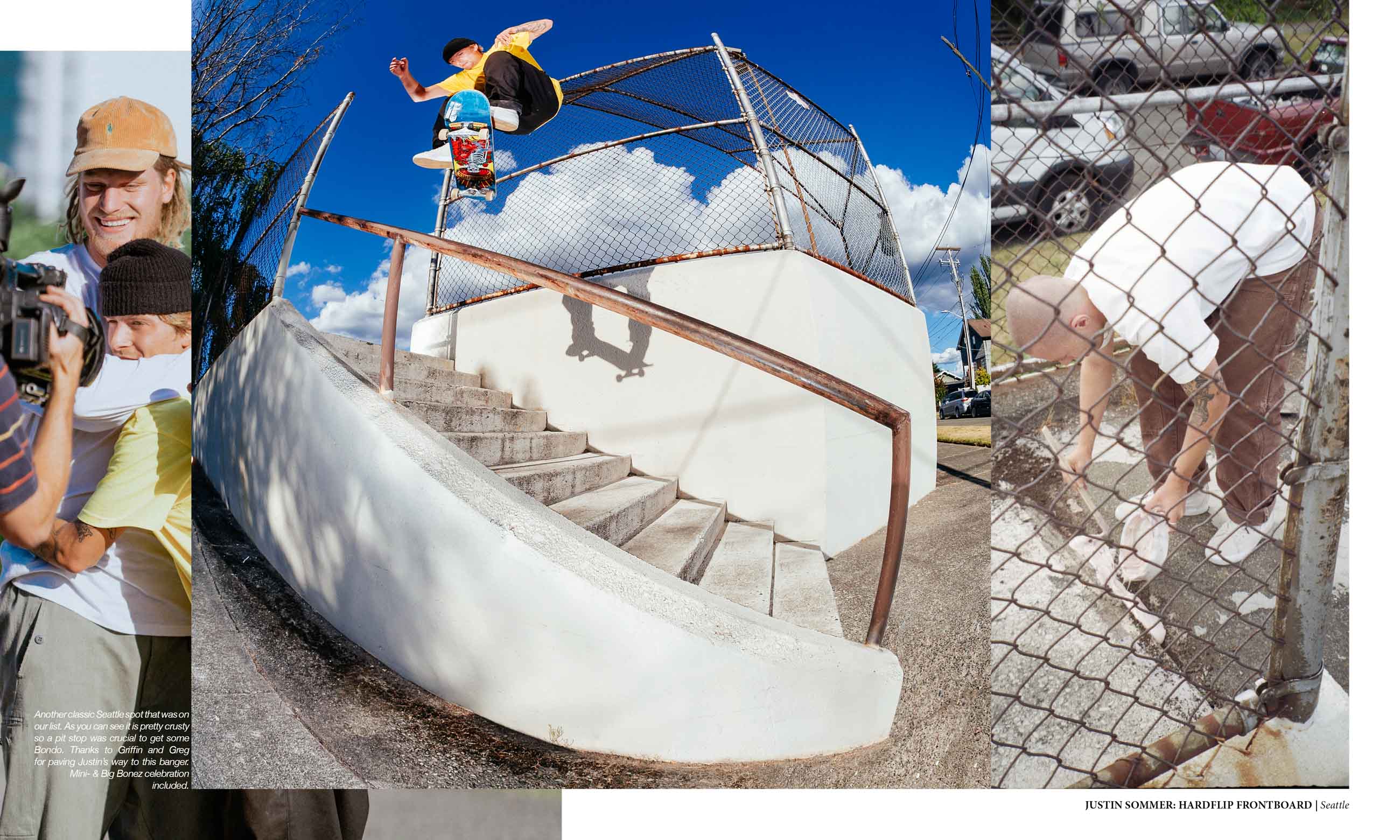 Another classic Seattle spot that was on our list. As you can see it is pretty crusty so a pit stop crucial to get some Bondo was. Thanks to Griffin and Greg for paving Justin’s way to this banger.
Mini- & Big Bonez celebration included. 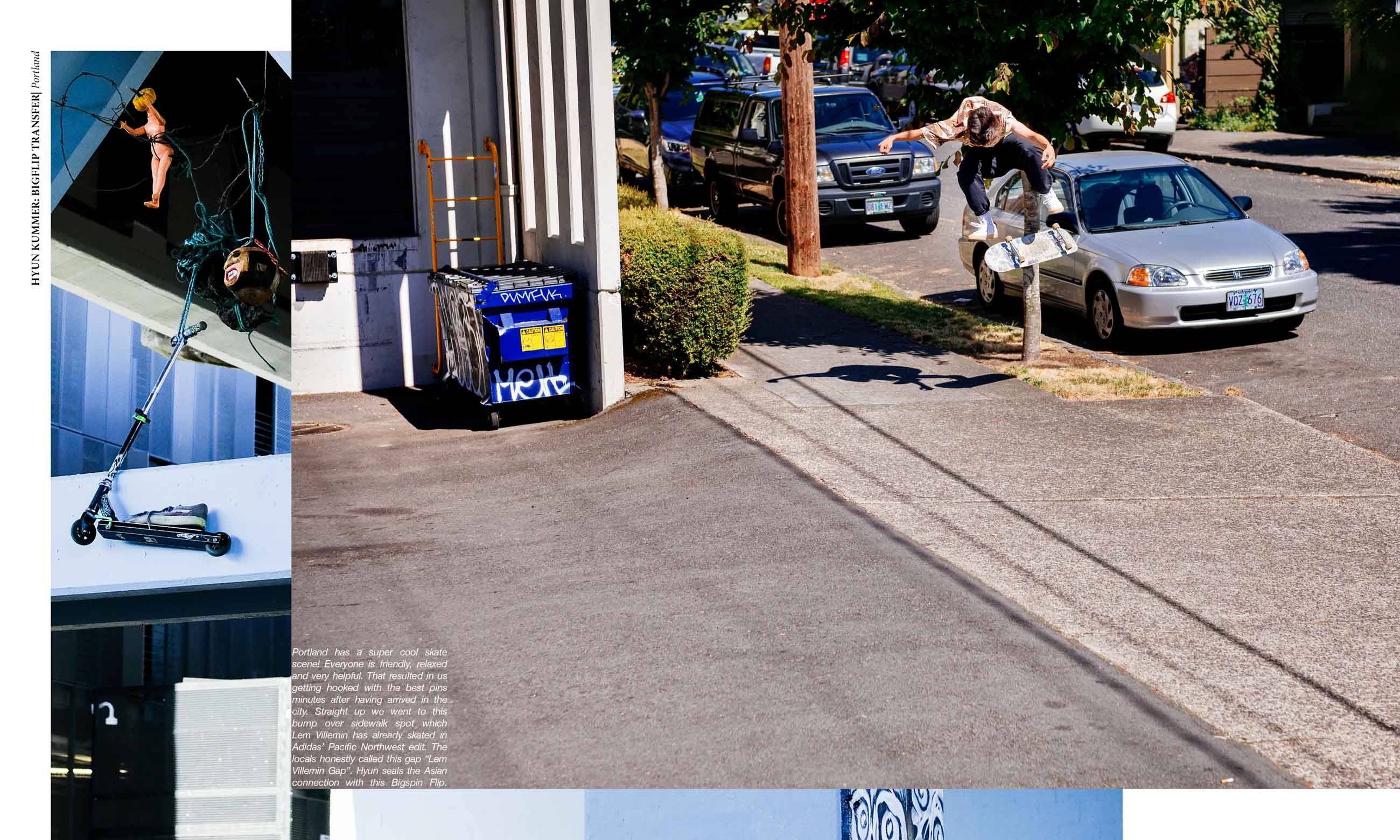 Portland has a super cool skate scene! Everyone is friendly, relaxed and very helpful. That resulted in us getting hooked with the best pins minutes after having arrived in the city. Straight up we went to this bump over sidewalk spot which Lem Villemin has already skated in Adidas’ Pacific Northwest edit. The locals honestly called this gap “Lem Villemin Gap”. Hyun seals the Asian connection with this Bigspin Flip.